The day of the Race Start arrived.  There was no trouble reporting to the boat at 7am. I had been sleeping on it, though most crew had found alternative accommodation for the couple of nights they were not at at sea.

We slipped moorings for a parade of sail down the Brisbane River and did a, apparently by now customary, turn round the OneDLL spectator boat.  Then it was out to sea for the refresher sail. This is normally the day before the race start but had been rearranged to allow four more of the boats to have their rudder bearings replaced. The other six will be done in Singapore.

The refresher sail took us through some of the basic manoeuvres to remind us and teach us how Eric likes us to do things now ie some small things had changed since the training.

The start was a Le Mans start, and not even the round-the-world crew had done this for real.  All the boats start in a line with just their mainsail up and the crew must put up the staysail and designated headsail at an appointed time. 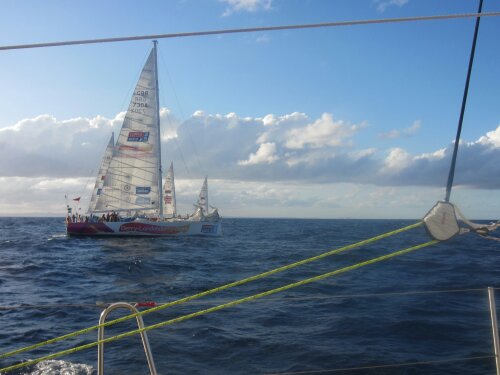 Lining up for the Le Mans start

Then came the watch system and the seasickness.  For two days I was only really comfortable when horizontal in a bunk. This was despite wearing an anti-seasickness patch behind my ear that had been recommended by some of the returning crew from previous legs. I kept feeling better and getting up and trying to go on watch. Then this feeling would not last long enough to get properly dressed and put on a lifejacket so I’d be sent back to bed, given a bucket or both.

This morning though, day three, was a great watch. My first stint at sitting on the rail, then at helming. It stopped me from the thought that I’d paid to feel this bad. Now sitting here below decks writing this I don’t feel 100% but I reckon by tomorrow I’ll be fine. Now I want to go on deck and catch some photos while it’s still my off-watch.