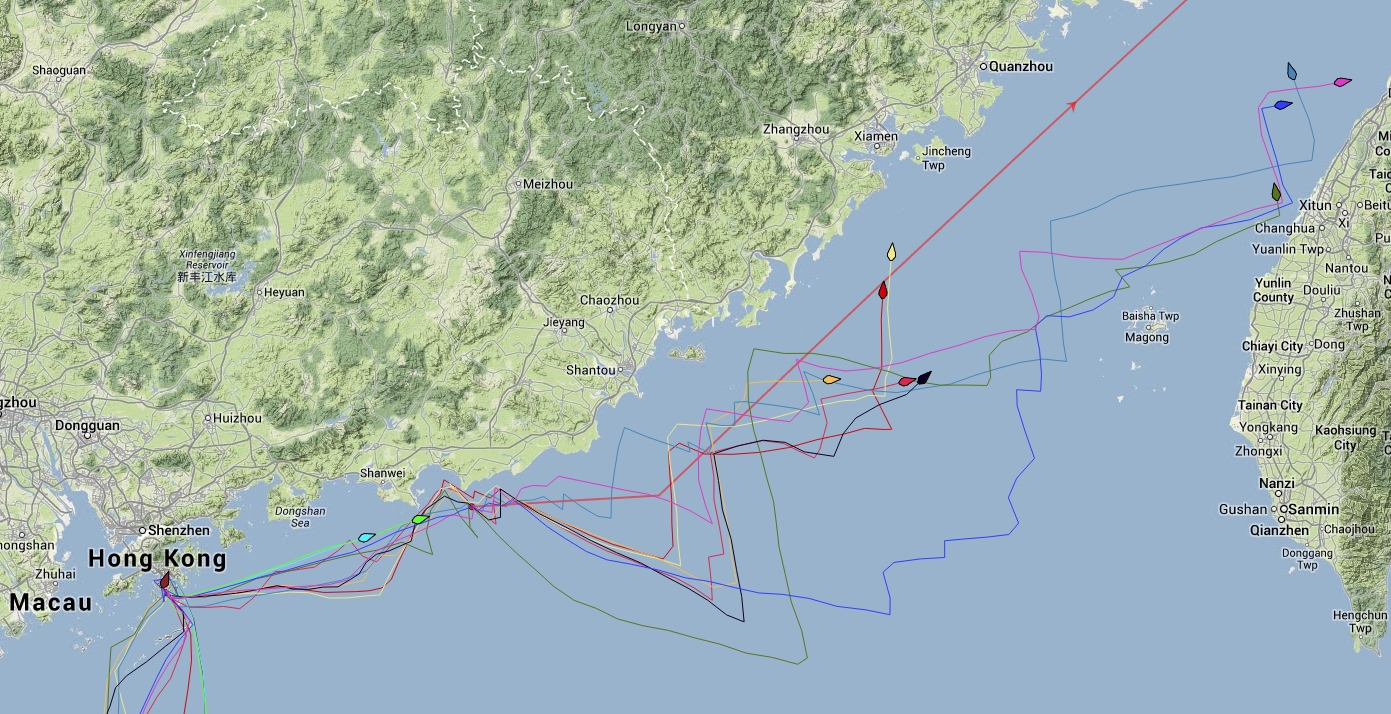 You will remember that Race 9 was halted for rigging repairs. All of the boats have now been repaired and the race has been restarted from a “point” outside Hong Kong. The boats are now fighting their way north up the Taiwan Strait. More news about the Hong Kong stop from Sarah on board Henri Lloyd.

Well, we left Hong Kong after far too short a stopover. We docked at the Royal Hong Kong yacht club in Middle Bay around 8.30 at night, and were happy to find that we were allowed ashore to the bar – a little sad to find that the kitchen had just closed, but we had a very pleasant few beers sitting outside overlooking the bay and the tantalizing glimpses of Hong Kong island beyond. You may have noticed that there was a bit of dawdling, a bit of a slow contest, on the way into Hong Kong – many skippers had seen the weather forecasts that said there would be dead calms over the weekend, followed by 25+ knots of wind from Sunday on. Obviously, with the new ‘elapsed time, all start at different times’ version of race 9, spending 12 or 24 hours in calms didn’t look like a good plan. But in the end, maybe the dawdling didn’t pay off, as Clipper eventually decided to let the first boats to leave motor until they found enough wind to sail, wiping out downside of being one of the first boats to start. However, we did OK out of it – we got a nightcap at the bar at least – Old Poulteney arrived after the bar had closed, and Qingdao did not arrive until the next morning. We also had a good night’s sleep, apart from a slight grounding issue in the middle of the night, which had us all pulling up our bunk strings as Henrietta assumed an angle of heel as if she were sailing. We did all get a great English breakfast while Sir Robin (and others) worked on the rigging problems. We showed a few yacht club members around the boat – they were quite surprised to find 5 ocean going yachts on their docks out of the blue like that. We took Henrietta round to Aberdeen Harbour for refuelling – a crazy conglomeration of super yachts, sampans, junks, a traditional old boatyard, floating restaurants, and high rise condos. I wish we could have stayed longer – but we were happy to negotiate it all without hitting anything, or being hit. And then it was out to test the rig – damp fog rolled in and we saw next to nothing of Hong Kong before we finally had to leave. We smashed our way directly upwind overnight – it was cold and wet and uncomfortable, such a contrast with the gentle cruising we were doing only 24 hours before. We eventually restarted race 9 at a virtual mark in the middle of nowhere, with a solid grey overcast above us, and the sea a pale sludgy green with browner patches filled with floating sand. A bit like the Thames Estuary. We continued to fight our way against the wind into the Taiwan Strait. There is tons of shipping, from huge container ships to tiny fishing vessels in large fleets. The constant chatter over the VHF reminds us that we are very much in China – can’t wait to actually experience it! As usual, the first day of an upwind race is tough on everyone – it’s hard to sleep and hard on the stomachs of the susceptible. We started behind the group of CVs we were with, and during the night we passed Old Poulteney and Garmin. Due to the vagaries of our tacking angles, we eventually met both of them again this morning – and Old Poulteney is once more ahead. We came very close to Garmin when we had to bear away to pass a Chinese fishing vessel – all her crew in matching green overalls came up to wave – they obviously don’t see ocean racers around here everyday. Since we had to drop downwind so far to allow the fishermen to pass, we were close enough to Garmin for a while to see the whites of their eyes. We have pulled away now, but they are changing their headsail to match ours, after Jan called Eric to ask what we were flying. So maybe they’ll catch up a bit soon. The wind and sea have mellowed a lot now – we have the yankee one up, there are no reefs in the main. The sun even came out, filtering through the grey. We took some time to set up our drying rack in the engine room again, and the mothers, Anita and Steve, are baking flapjacks as a treat for Chris’s birthday. This strange race continues…

I didn’t have chance to Skype with Anita while she was in Hong Kong. All we managed was a couple of texts but I don’t think she saw the last ones 🙁 She didn’t manage to meet up with a cousin who lives in Hong Kong either but he did get to see a couple of the boats! Just hope Anita arrives in Qingdao in time to transfer to Beijing for her flight out of China. No sight-seeing I fear 🙁