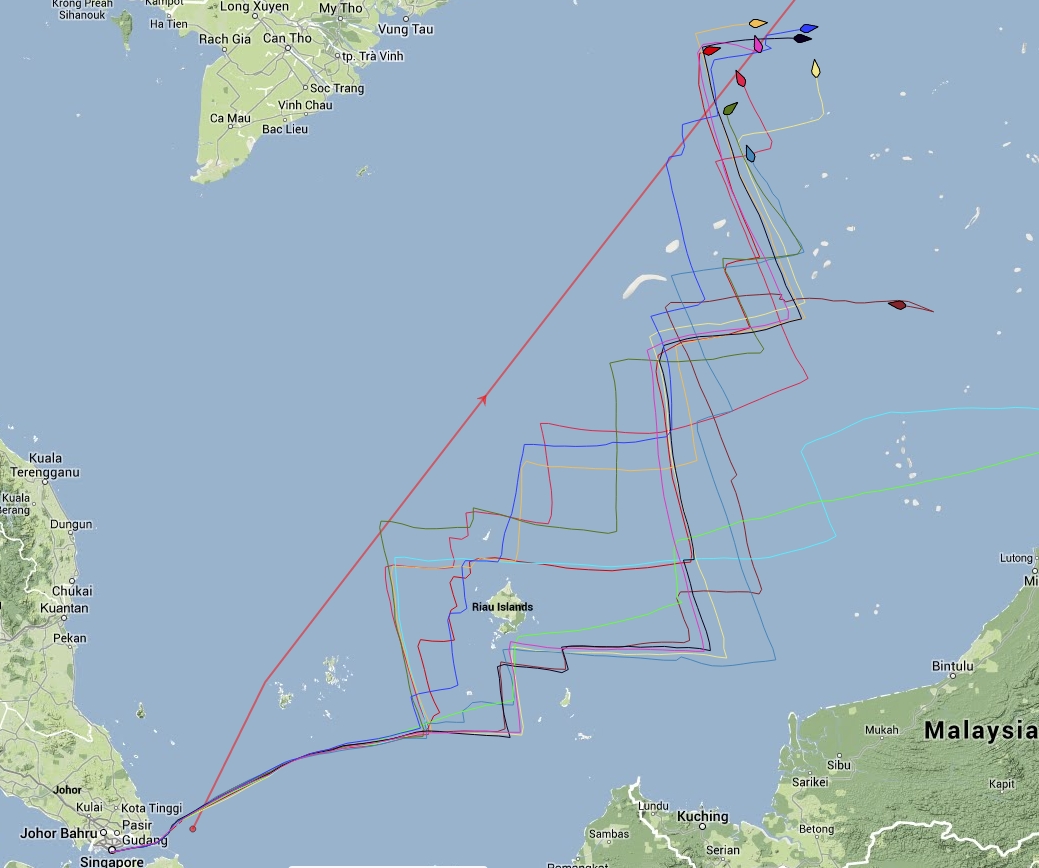 So – Race 9 has well and truly started. Race 8 was an epic and ended with Henri Lloyd in first place, just four boat lengths in front of GREAT Britain.

So far, Race 9 has had several obstacles to overcome.  Firstly the start wasn’t possible because there was no wind! What??

The start of Race 9 from Singapore to Qingdao, China has been delayed due to the lack of wind and fading daylight.

The Race Committee has decided the Race 9 start will now take place at 0700 local time or 2300 UTC this evening.

As a result the fleet is proceeding north east on a course of 065° at 6 knots overnight until all 12 yachts are together at which time they will increase to 8.5 knots and aim to conduct a Le Mans start at first daylight.

The next news to arrive was that Jamaica Get All Right had retired from the race because of a failed forestay bottle screw fitting. I think that helps to hold the mast up??

As the fleet starts Race 9 to Qingdao in China, Jamaica Get All Right has unfortunately had to retire due to a failed forestay bottle screw fitting. The forestay supports the mast and is also what the Yankee headsail is attached to. The crew on board are fine and well and conditions safe as a spare Yankee halyard is being used as a temporary forestay to stabilise the rig.
Jamaica Get All Right has begun to motor-sail to Kota Kinabalu in Malaysia and is due to arrive in four days’ time to receive a new fitting. Best effort will be made to repair the boat as quickly as possible and the team will then make best speed for Qingdao immediately.
The retirement due to equipment failure will see the team awarded with 1 point.

There has been some further news directly from Sarah on Henri Lloyd. This sounds like hard work and I thought they were there to enjoy themselves!

We still have the frustrations that come along with the difficulties of making these boats go upwind – but we are all remaining cheerful as we try different things, some working better than others. As we currently seem to be making gains on the pack around us, at least some of what we are doing must be on the right track. Helming in these conditions is a matter of great concentration and small rewards – so different form the ‘easy pickings’ you get when surfing downwind! Never mind, only another 2099 miles to go – if, that is, we could sail directly to QingDao. They are surely going to be some long and painful miles, before we are done with this race.

However, things then turned even more exciting!

Things got perhaps a little too exciting early this morning. First I was rudely awakened by a slosh of cold salt water on my feet – obviously waves were splashing over the deck and finding their way through the open port onto my ‘lower monkey’ bunk. I tried to ignore it for a moment, but from the sounds I could hear on deck (a reef going in) the wind had obviously increased and there was a good chance I’d soon get wetter. So I crawled out and shut the ports, then used my towel to mop up the worst and went back to sleep. Not for long – it seemed like I’d only just dropped off again when I was woken by Eric politely asking us all to go up and help with a headsail change. Exactly 2 and a half hours into our off watch is a terrible time to go on deck – you just know you probably won’t get back to sleep for at least 6.5 hours.
But at least at 6.30 it was daylight, and we had time to dress in waterproofs against the spray. It was nice to see QingDao abeam and probably less than half a mile away – we had definitely caught them overnight – hunted them down as we’d planned. It was the usual wet struggle, getting down our massive yankee one after the wind had increased dramatically. We were doing a racing sail change, where we hank the new sail on below the old one before we drop it – the idea is to minimize the time without a headsail. But with the tiny narrow space these boats have at the bow, the 2 sails soon make it very difficult to move around up there. We were in the lowering phase, about 6 of us on the lower rail, jammed between the staysail and the lifelines, pulling down and back on the flogging yankee 1, when suddenly Maaike, on the bow, gasped, and yelled ‘Man Overboard‘ – definitely too exciting. Even where I was, close to the bow, I couldn’t see who was over and if they were still attached to the boat – it must have been impossible to tell from back at the helm. As I stepped forward though, I could suddenly see a crew member (who wishes to remain anonymous). swinging by his arms below the bowsprit – he was still clipped on and attached to the boat, but boy did he have a surprised expression on his face! So did we all, looking down at him, I suspect. We swiftly hove too, to make the side he was on the new high side, putting him further above the water, and the bow crew were close enough to grab crewmember X’s arms and his harness and pull him back inside the boat. We let him flop and recover on top of the sail for 30 seconds, but as soon as we were sure he was OK, Morgan told him he had to get off the sail so we could carry on with the change. We even decided to stay on the new tack – Eric joked that we had to tack sooner or later anyway, so crewmember X had done us all a favour. Yes all our emergency procedures were followed, and worked perfectly.

Whatever next – not good reading for a Mum!!

Henri Lloyd had battled to second place when we heard even more surprising news. Don’t think ANYONE could have predicted this!

Owing to the failure of three of the forestay bottlescrews in the fleet of twelve Clipper 70s in the current Clipper Round the World Yacht Race, the fleet has been instructed to stop racing as a precaution and make its way to Hong Kong.
“There is clearly a fault with this part of the rigging and we are not prepared to take any risks with the remaining boats so far unaffected,” explained Sir Robin Knox-Johnston, founder and chairman of race organisers Clipper Ventures. “In Hong Kong the forestay bottlescrews will be replaced with a system we have just had approved by the MCA surveyor.”
Hong Kong is 770 miles from the leading yacht’s present position and the best estimate of arrival is Saturday 1 March. The boats will be turned round as speedily as possible and then will start racing together to Qingdao.
The options for the Hong Kong to Qingdao leg are being assessed at present and further information will be forthcoming, but it appears unlikely that the Qingdao schedule will be affected very much, if at all, because of the availability of more direct routing options.
The forestay supports the mast and is also what the Yankee headsail is attached to. A few days ago Jamaica Get All Right suffered the first failure and diverted to Kota Kinabalu in Malaysia; Last night PSP Logistics experienced the second failure, followed a few hours later by Derry~Londonderry~Doire.
The crew on board all the vessels are fine and well and conditions safe as a spare Yankee halyard is being used as a temporary forestay to stabilise the rig.
All of the boats will now make their way to Hong Kong. No points will be awarded and Race 9 will start afresh from Hong Kong to Qingdao. The yachts that have retired will therefore not be penalised and will rejoin the race from Hong Kong.

It is really reassuring to know that safety has taken precedence over racing. Also that the remainder of the race schedule shouldn’t be affected.

What next? Just wait and see!