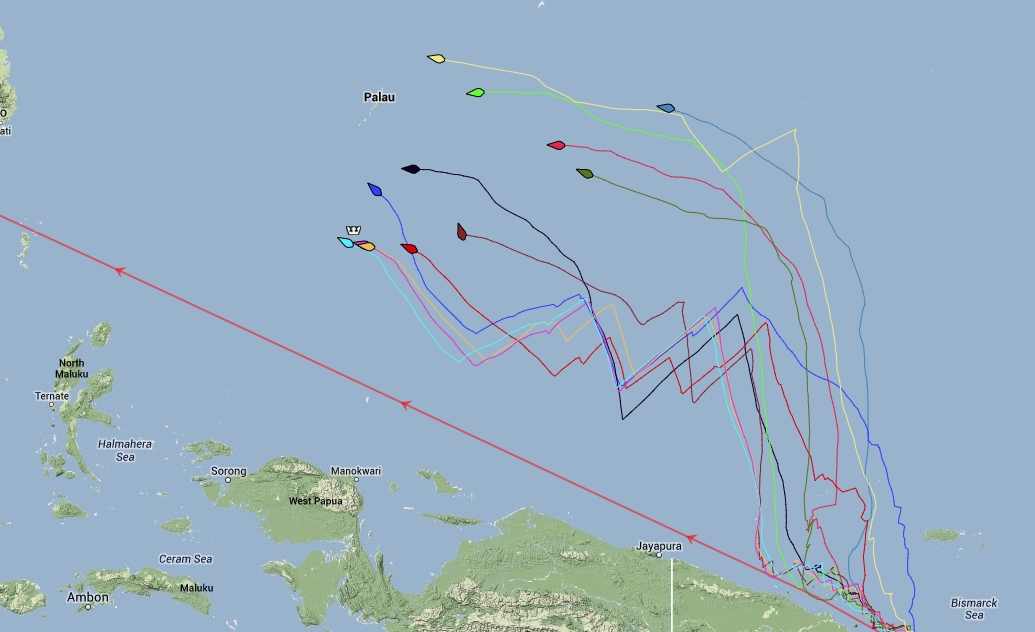 More news since the last lot!

Well finally, after the light winds, grey skies, squalls and calms, we seem to have found some real wind, and the sun has ALMOST been out today. It’s a stronger, more steady wind, but of course it is still blowing from exactly where we need to go.
So things are looking up around here – it must be 12 hours since we were last becalmed, and maybe 24 since we had a proper squall. And of course it doesn’t hurt that two nights ago (the night we flew the A1 for a while) we finally left Switzerland behind, and then the next day PSP as well. And this evening we have switched from the Yankee 1 to the 2 – the first time the 1 has been off deck since the first evening out of Brisbane. We’ve seen no ships and no islands today – just the sea and the sky, and about 2 birds of unknown variety. A highlight of yesterday was passing Blup Blup island, and tonight, we may well see Wuvulu. Of course it is still extremely hot below decks, but I think we are just getting used to it. From Henri Lloyd 50YOPS, goodnight.

Crossing the equator! Not how one imagines it though.

As gale force winds batter the twelve teams competing in Clipper Race with wind speeds in excess of 85 knots on deck, it hasn’t been a typical Equator crossing for the fleet as it crossed into the Northern Hemisphere in the last 24 hours.

If you were to have asked how I expected we would be celebrating our Equator crossing, it would not have been bashing into a gale. It has been a wet, rough, and wild night and now continuing into day. As we come down off the steepest waves, every loose item on board comes crashing down after being temporarily airborne, making an awful commotion.
I think I preferred our roughest Bass Strait crossing to this, at least then the seas were on the beam. It would appear that I am a fussy skipper, always either too little or too much wind, and always from the wrong direction.

Whooah! For sure, the Leg 5 brochure does not read like this: As you cross the Equator you will be sailing in typical, sunny tropical weather, not typically 85 knots of wind across the decks, 6 metre waves, driving rain and huge squalls every couple of hours.
What is going on? The hardened Leg 3 crew on board are saying it’s like a Bikram Yoga Southern Ocean experience on speed.
The intense line squalls are appearing across the radar screen like tiger stripes every two hours and are delivering sustained winds of around 40-50 knots with gusts into the 60s and even 80s. In-between it’s not exactly moderate sailing, with winds averaging around 30 to 40 knots, pretty well gale strength.

Well we wished for different weather, and instead of all that light and fickle stuff, we got strong and superstrong winds – naturally coming from exactly where we need to go. So we are bashing and smashing our way through the Bismarck Sea – teeth and everything else rattled at regular intervals as Henrietta throws herself down the waves. These boats are horrible and uncomfortable going up wind – sleep has been in short supply for everyone for the last 48 hours, and it’s been so wet on deck we have been wearing foulies at night, while down below we are still living in a sauna. Two nights ago as we fought through a seemingly endless stream of fierce squalls (180 degrees of Eric’s hair, at least) – Skipper on the helm, triple reefed main, heaving to to drop the headsails, the whole shebang – there was a brief rent in the clouds revealing, of all things, the familiar outline of Ursa Major. And sure enough, sometime during yet more squalls and rain yesterday morning, we crossed back into the Northern Hemisphere. Ceremonies are on hold, however, until better weather – and there’s a good chance we’ll cross back to the southern side of the equator, however briefly, sometime tomorrow.
Our wind instruments had been reduced to just the windex and Eric’s coiffure for this race – now we’ve lost one of those two stalwarts (never fear, the coiffure is safe). This morning, our active radar repeater at the top of the mast broke loose, and proceeded to swing around wildly, smashing the windex to pieces, before taking its final death plunge into the sea. So we are really down to the basics – especially when night falls and we can no longer see the telltales on the sails. Never mind, we still have one working compass! As I write this, James’ washing up water is leaping out of the sink on every wave and splashing on my legs – at least it’s not salty. I think it’s going to be a long hard night here for Team Henri Lloyd 50YOPS.

On 28th January, Clipper announced that this race will be shortened because of uncommon and unexpected weather patterns which are hindering the fleet’s progress towards Singapore. Justin Taylor said,

The sea area where they are sailing in currently should be characterised by north easterly trade winds which should be allowing for fast downwind sailing conditions.
Instead the fleet is battling against strong headwinds which are being produced by a depression which is north of them. These strong winds are forecasted to last for another four to five days, therefore the intention is to shorten course at Sarangani virtual mark.
When Sarangani virtual mark bears true north (000T) each yacht shall record their time. The cruise phase of the race will then commence from this point and not Basilan Gate as originally intended.

I have NO idea where these places are so will just have to wait and ask Anita when she eventually arrives in Singapore. This is now expected to be from 10th February onwards. Race re-start from Singapore to China will now be on 16 February and not on February 15.

..and so it goes on, and on, and on. Still battling our way up wind – it seems to have gone on forever. The wind and sea go down a bit, then build again – we reef, unreef. Today things definitely lightened up, and both watches had an exhausting time – first port watch changed from the Y3 to the Y2 – exhausting in this equatorial heat. But that proved not enough, so both watches then worked to get the big one, the Y1, up instead. Not really fun at all. But it was a beautiful sailing day, with blue sky and sparkling sea.
——–
Helming by feel and getting our heads out of the compass is what Eric has been trying to teach us for 20,000 miles or so, but now we have no choice but to learn it. I am sure we will all be much better sailors after this race, as a result. We never did quite cross back to the Southern Hemisphere – last night we got really close to the equator – and in the sky we had the Southern Cross and the Great Bear, at the same time, with Orion lying on his side somewhere in between.
———
This continues to be a very empty patch of sea we are in – with little shipping and less wildlife. Two nights ago we encountered the strangest thing. It started as a loom of white light over the horizon, that did not show on AIS or Radar as anything at all. We sailed on in the darkness and it got brghter and closer, exerting the awful magnetism of things you want to avoid (potholes when cycling, trees when snowboarding). We thought it might be another drilling rig, except we couldn’t be absolutely convinced it wasn’t moving. It got brighter and closer still, but not clearer, until eventually another little set of lights appeared not far from it. The second set of lights turned out to be a tug, and the first its tow – a bona fide battleship, guns and all, lit up bright white like some ghostly apparition, rocking gently on the waves. We’ll never know whose it was or where it was going – but strange battleships and boardings by naval forces have been featuring in the dreams of many crew, as we attempt to sleep in the crashing sticky heat down below.

It was actually a rather lovely sailing day on deck – the starboard watch dealt with squalls this morning, but we had sunshine and clouds, only moderate waves, and were flying along at good speeds in the right direction for quite a while. And then there were dolphins – a large pod of tiny leapy ones, bouncing in and out of the waves as if they were born to jump.
——–
Things were not so good below decks – the generator started giving us trouble at around 7am this morning – James, Eric and Herb, among others, have spent many hours in the heat – (no generator means no fans) trying to fix it. To no avail so far – I understand there is a hole in the heat exchanger – not an easy fix at all, even for our resident wizard, James. So now we are running the engine to charge batteries, but at least we have fans again, although no electric kettle.
Everybody has been much more cheerful since we decided not to just play follow the leader with the rest of the fleet. Perhaps it’s because conditions have moderated, or perhaps because we’re not good followers? We’re definitely learning to sail the boat better with our limited instruments, and I think it’s giving everybody a new found confidence. Meat loaf for dinner, prepared by Anita and Nick, now the mince has been chipped out of the freezer. A good hearty meatloaf with mashed potatoes is just what you need in these equatorial conditions, isn’t it? But it will sustain us through the long night watches.

AnitaSailsAgain by Anita Davies is licensed under a Creative Commons Attribution-NonCommercial-NoDerivs 3.0 Unported License.
Based on a work at https://anitasailsagain.com.
Posted in Henri Lloyd