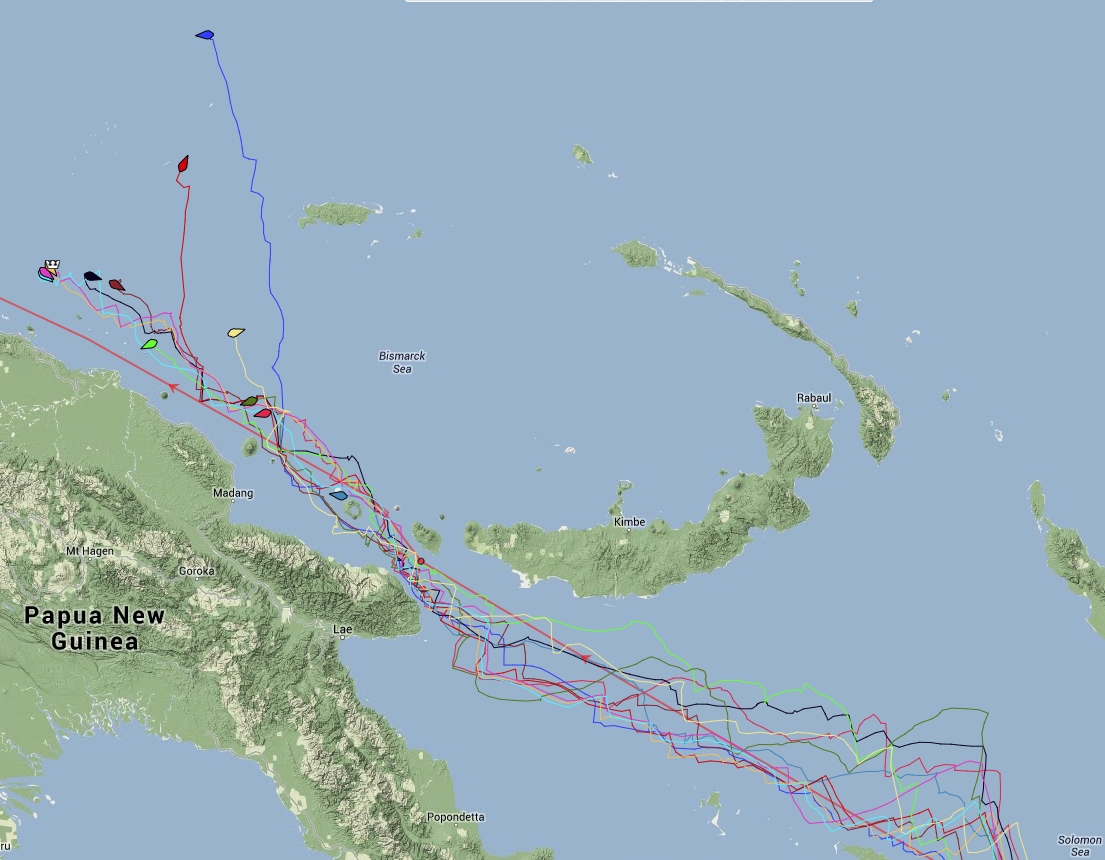 Since my previous post about Race 8, conditions have not been favourable to the fleet.

I can only “steal” information from various reports but I feel that is better than nothing. Henri Lloyd has been consistently in seventh position and has, in the last day or so, fought very hard to reach fourth position. If you look closely at the picture above, you might see that the boats in positions 1 to 5 are ALL going BACKWARDS – and Henri Lloyd is going fastest – backwards!

I am no saint but I will have to have the patience of one to get through this leg. Last night we did 15 miles in 12 hours, most of that was in a couple hours around a massive area of thunderstorms.

We have been going through a massive rainstorm for most of the day, squalls, huge wind shifts, calms, and lots and lots of rain. It was great at first to get a shower on deck but now that I can’t get any cleaner enough is enough. It’s good to know it is not always hot in the tropics, and today has been a nice respite from the heat.

The Solomon Sea has not been that kind to us and it will be nice to get through the Vitiaz Strait and see if we can turn our luck around in the Bismark Sea. Lots of shipping going into and out of the strait, and with such poor visibility through all the heavy rain we’ve turned Automatic Identification System (AIS) back on for the time being, and we see another Clipper 70 boat up ahead so have a target to race against for the first time in a few days.

Sarah, on board Henri Lloyd

Last night we reefed, unreefed, trimmed, tacked – in fact did everything we could to make upwind progress through the Vitiaz Strait. We had strong winds at times, down to 2 reefs in the main, and the bashing was so bad that no one could sleep below decks. But today it seems it was all for nothing, as we are completely and utterly becalmed, drifting gently round in circles off Scharnhorst Point in Papua New Guinea.

Becalmed again, and currently being sucked back down the Vitiaz Strait.

I’ve been told if you have nothing good to say then better to say nothing, so I’ll keep this one short. No wind.

Sarah, on board Henri Lloyd, with mention of Anita

For all our complaints about slow progress, this is an incredibly beautiful seascape we are in. The sea is like a piece of tin foil that you’ve crumpled up and then smoothed out again, all ruffled and silver, and the sky is full of shades and variations of soft greys. We are working our way along a chain of volcanic islands, each perfect cone. with its crowns and garlands of clouds on the upper slopes, is silhouetted against the general silveriness. It’s like being in a Japanese brush painting.

Today we passed Manam island- an active volcano, with what looked like great clouds of steam pouring out of its crater and streaming off downwind. It is all unbelievably exotic, and worth sailing against frustratingly light winds and the north-west monsoon to see. We’ve been racing Switzerland at close quarters for days now – last night we played cat and mouse after they emerged dramatically at sunset from behind one of the islands. All night long we hunted them – momentarily creeping ahead at times only to stall in light and flukey winds, letting them gain the advantage again. At one point in the darkness we were almost close enough to deploy the grappling irons and seize the mythical Swiss chocolate they are loaded down with. Actually, some of their washing up liquid would be more valuable right now, and we’d like some of their fancy Clinique sunscreen…

Today we also have PSP in sight – and now it’s dark, the wind has changed enough for us to raise first the windseeker, and then the light weight kite. It’s an inky dark night, and as Anita and I have mothered today, I was able to enjoy a solar shower and then just sitting and drying in the warm night, rather than grinding, trimming, and helming with the rest of my watch. After a light supper of Anita’s excellent bread with jam, I’m off to enjoy 12 uninterrupted hours in my bunk, accompanied by a fully charged battery pack to drive the USB fan that is making sleep possible for each of us on this hot and humid leg. I just hope I won’t be woken by a sudden squall and a call for ‘all hands on deck’ to drop the kite.

Slow but steady. Painfully slow, yes, but at least we are still moving at a snail’s pace. We had a decent evening yesterday with a squall but since then the wind has dropped off and no more squalls are in sight. We do though have two Clipper 70 yachts in sight, the first time in who knows how long.

We had a great battle last night with the Swiss entry, Switzerland, and hopefully having that other boat to push you hard helped us gain some miles together. They behaved in a very sporting manner, always calling us up on the radio when they would spot a log that could cause us harm.

Waking up this morning to see a volcanic island lightly smoking away was novel, yet the fact that we can still see it these many hours later makes it decidedly less attractive.

What a busy 24 hours it has been. I have never experienced weather quite like this, it seems never ending. Every time I put my head down its another call of ‘squall’, usually phrased as, “sorry to bother you again skipper, but…” Now I’m getting pretty tired and tempted to roll over, but when they say, “and there are a couple of water spouts coming towards us, should we be concerned?” that gets my attention. The problem is now they know how to get me up, there is a tendency to cry wolf. It can be a big process to get a skipper out of bed when he doesn’t want to; I usually expect to be bribed with fresh coffee. But now a call of waterspout gets me on deck in seconds, still in my underpants. After a quick assessment on deck, I determine whether there is enough time to dash back below, change out of my nice dry pants and into my soaking wet shorts before getting drenched for what seems like the hundredth time today. The amount of water that these clouds can hold is unbelievable, nothing in the Atlantic Doldrums compared to this. You would see a white wall approaching and then visibility would drop to near zero and the seas would get flattened by the rain. There has been surprisingly little force to the gusts ahead of the squalls, and almost no wind under them.