Well, as you may remember, Henri Lloyd had to retire from the previous race (Rolex Sydney to Hobart Race) because of a problem with the bearing on the rudder. It also appeared that the same problem was present on PSP Logistics to a lesser degree. Both boats were hauled out of the water for repairs.

Next we heard some more bad news! Henri Lloyd’s top and bottom rudder bearings were misaligned which meant that the rudder could not be replaced. This caused an extra delay and meant that Henri Lloyd was NOT ready to start Race 7. From Clipper:

However, a complication in the repair of Henri Lloyd’s starboard rudder means this will not be complete in time for the race start, so the yacht will leave approximately 20-24 hours later and will be awarded average points for Race 7, based on the previous races.

Race Director Justin Taylor explained the situation: “This morning we encountered a problem with Henri Lloyd’s starboard rudder when it was discovered that the top and bottom rudder bearings were misaligned, which meant we could not replace the rudder.

“A solution has been found and work is being carried out now and overnight.  However, it means that Henri Lloyd will not be ready to race until Friday 3 January, when the work on the rudder is completed.

“It is necessary to do this as Henri Lloyd will be starting in different weather to the rest of the fleet which means using an alternative method of scoring such as elapsed time is unfair.”

The rest of the fleet will slip lines at 1530 2 Jan local time (0400 UTC) and will take approximately an hour to depart and position themselves ready for the start line off Constitution Dock at 1700 local.

Race 7 started without them 🙁

Mission Performance then had an incident below decks that caused them to return to Hobart and two crew members were taken to hospital by helicopter for assessment. Luckily both were released the next day. Mission Performance also had a problem with her engine so was escorted back to Hobart by Qingdao. She left Hobart on the following day with some volunteer Qingdao crew members and Henri Lloyd who wasn’t allowed to race because of the delay but has been awarded redress of 9.9 points for this race.

Eric found it very emotional watching the fleet depart without them but he is using the time wisely. Apparently it is like a training voyage! 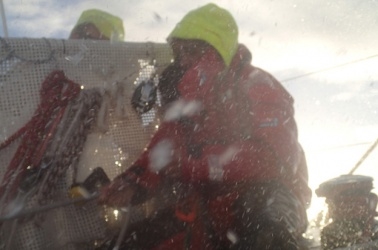 Because of storm damage, PSP Logistics has also had to retire from this race 🙁 So that’s two boats not racing!

Well, it seems ages since the Mission Performance incident. Eventually, Switzerland won both the ocean sprint AND the Race gaining 14 points overall. This was their first win. In case you aren’t aware, Switzerland has the only female skipper.

Derry~Londonderry~Doire came in second followed by One DLL.

Overall, One DDL is in the lead with 71 points closely followed by Henri Lloyd in second place with 68.9 points. Derry~Londonderry~Doire is in third place overall with 61 points.

The REALLY exciting part is that Anita will be sailing on the next two races!

Postscript!
The really eagle-eyed among you will notice on the Race Viewer picture above that Henri Lloyd hasn’t actually finished even though the race is over!