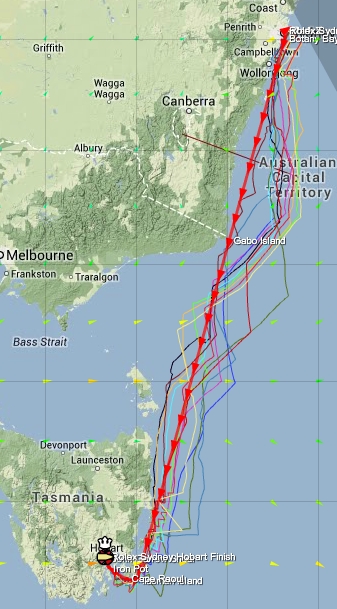 This was a race of mixed emotions.  At the start of this race, Henri Lloyd was in overall lead with 58 points and had just won Race 5.

Sydney was the half-way point of the whole Round The World Yacht Race and all of the boats had been hauled out of the water for a thorough check and whatever else these sailors need to do to their boats to keep them in tip-top condition!  Who can tell that I’m NOT a sailor??

Race 6 started well and for the first half was very closely run with Henri Lloyd usually in the first three and quite often in the lead. Clipper:

With just over 5 miles separating the top four Clipper Race teams as they pass the halfway mark, tensions are reaching summer boiling point. The race leader and fleet positions change frequently and podium positions are anything but predictable as Race 6 continues its thrilling progress.

In a dramatic past hours racing, GREAT Britain (44th overall in the Rolex Sydney Hobart Race) moved up four fleet positions to take over the Race 6 lead momentarily from Henri Lloyd (42nd overall) who has just now regained its front spot.

Derry~Londonderry~Doire (45th overall) has made terrific gains this morning and whilst writing this report has now moved into third (50th overall) with Old Pulteney (51st overall) who had led the fleet for the previous 36 hours, now fourth.

In a frustrating night for Team Garmin and Jamaica Get All Right, both slipped down the leaderboard but are far from giving up in their chase for a podium finish.

Team Garmin Skipper Mark Burkes said: “After being in the leading trio of the Clipper 70 Fleet for the first 36 hours or so, I awoke this morning to a rather demoralising sight. We are now eighth. (now sixth as we go to press). Sailing, and wind in particular, never does anything by halves. It’s always ‘feast or famine’! At least we are sailing now and making decent progress. Our next task is to catch up those boats that passed us in the night.”

Providing his take on the race so far, Deputy Race Director Mark Light said: “The fleet has left the sunshine shores of South East Australia and passed Green Cape, entering the notorious Bass Strait. This stretch of water can be ferocious, like a raging animal baring its teeth. At the moment it is more akin to a small kitten asleep in the sunshine, but the latest weather forecasts are showing things are going to change. 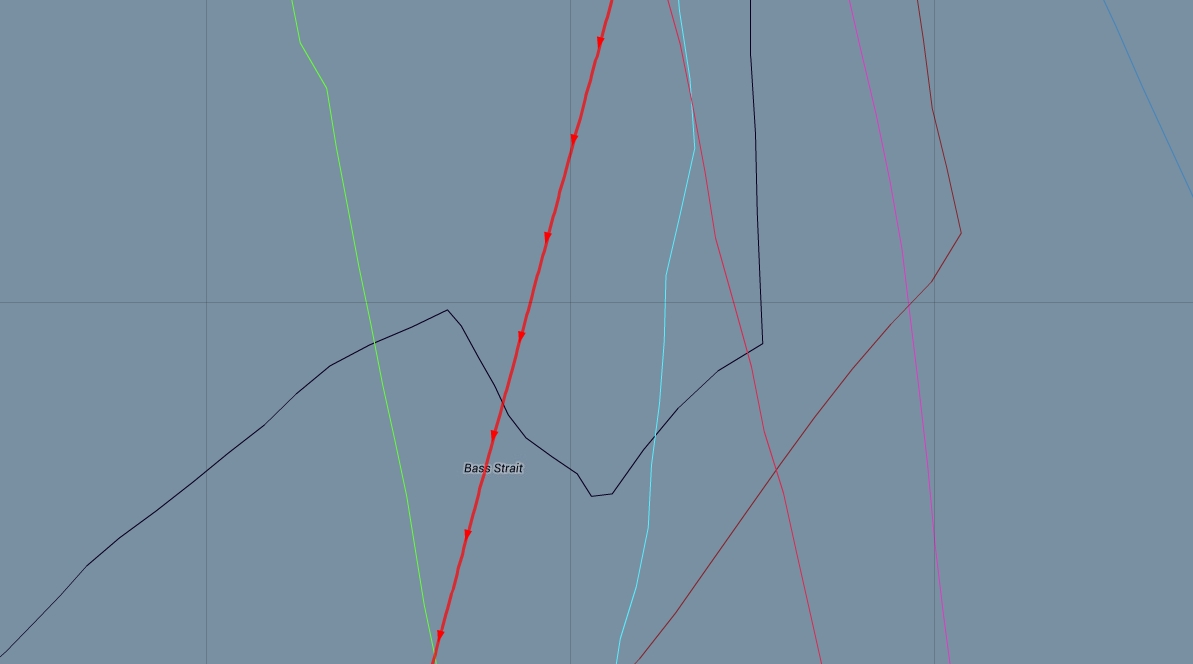 Saturday morning (UK time) we woke to look at the Race Viewer (above) to see that Henri Lloyd was doing some very strange things – even heading in the wrong direction (Henri Lloyd is the black line). First thoughts were that someone onboard had been injured and we were very concerned. However, it soon became clear that it was the boat which had a problem causing them to retire from Race 6. Clipper:

At 2211 local time on Saturday (1111 UTC) Henri Lloyd informed the Clipper Race Office of its intention to retire from Race 6/ The Rolex Sydney Hobart Yacht Race.

Clipper Race Director Justin Taylor explained: “This is due to a damaged rudder bearing which is allowing excessive movement of the rudder shaft.

“The skipper is making a seaman-like decision to retire and motor sail into the comparatively calmer waters off Flinders Island before altering course for Hobart.

“This is in an effort to prevent further damage to the rudder bearing.  The yacht is not in any danger and should make Hobart without any outside assistance.

“We are monitoring the situation and are in regular contact with the skipper.”

Skipper Eric Holden said: “It is obviously a big disappointment to have gone from leading the Clipper 70 fleet in the Sydney to Hobart race one minute to being forced to retire the next. It has also cost us the lead in the overall standing of the Clipper Round the World race. We are a strong competitive team and we will bounce back from this adversity so don’t bet against us just yet.”

Henri Lloyd is currently at the top of the overall Clipper Race leader board, so this will be a big setback to their campaign as well as ending Holden’s fourth RSHYR prematurely.

We breathed a sigh of relief but …..

It must have been a hard decision for Eric to make but he had to look at the overall position. To continue in the Race might well have meant further damage to the boat and might have incurred penalty points as well. Race 7 (Hobart to Brisbane) might also have been affected. Brisbane is where Anita joins the boat so they better mend it before then!!

Eventually, Derry~Londonderry~Doire won Race 6.  One DLL came in 4th which puts them in overall lead with 60 points. Henri Lloyd had to retire from the race but they were awarded 1 point giving them an overall score of 59 and in second place overall.

Latest news is that the rudder bearing problem has also been discovered on PSP Logistics but to a lesser degree. Both boats have been hauled out and new bearings are being manufactured. The starts of both Race 7 and Race 8 have been delayed by one day but this should not affect the arrival window in Singapore of 8 to 9 February.

With the Clipper 13-14 Race fleet due in Brisbane, Australia over the next few days there’s been time to reflect on the fleet’s adventures since setting sail from London last September.

None more some prestigious that the Rolex Sydney Hobart Race, where all twelve Clipper 70s along with two Clipper 68s took part in the world famous race.

On board CV10 – one of the Clipper 68s – was Race Founder and Chairman, Sir Robin Knox-Johnston.

“The Rolex Sydney Hobart Race is one of the world’s great offshore races and it has earned a well deserved reputation for providing testing conditions for sailors and their boats. Hobart is, after all, in the Roaring Forties.

“Our boats are not stripped out like most of the racers, they are, after all, racing around the world and carrying a lot of additional food and stores that other boats dump for the race, but we knew that, and thought the experience would more than compensate for struggling against stripped out 100 footers.

“The race itself, traditionally starting on Boxing Day from inside Sydney Harbour, attracted 94 boats this year including 14 from the Clipper Race. With light winds forecast for the start it would obviously pay to go and search for the south flowing current to compensate for lack of wind. That is what we did aboard CV10, skippered by Jim Dobie with a crew of largely former Clipper Race veterans.

“This got us to the Bass Strait in about third overall amongst the Clipper Race boats. At this point the wind came up strongly from the northeast, ideal Clipper 70s weather, and we raced on waiting for the position updates to see how far back we had dropped.

“In fact we held up well, lying fifth as we got to the lee of Flinders Island as the front passed over and the wind rose to a south westerly Force 8, gusting 44 knots in one spike.

“We headed in towards the Tasmania coast to reduce the fetch and thus the size of the waves and started to reel in the Clipper 70s.

“Derry~Londonderry~Doire had got away from everyone and was sailing very well, but the others could be targets for us and we hunted them.

“By the turning point off Tasman Island we were within a couple of miles of four Clipper 70s and had everything to race for.

“The wind was lighter, not necessarily good for us, but you sail to your strengths not your weaknesses.

“As we entered the River Derwent, with ten miles ago, we discovered to our delight that there were four Clipper 70s in sight astern and only one, Derry~Londonderry~Doire, ahead.

“That was satisfying. What was more so was to discover we had beaten the legendary Ragamuffin on IRC Handicap.

“The Clipper 70s came in very close together, both on time and on handicap.

“For the crews, well, they now have bragging rights. They have done one of the great iconic races and it was not an easy one.

“Well done to them all.”