I wrote this in April and have just noticed that it had never been published, most likely because I needed to add the photograph of me and Peter that was taken by crewmate and friend Maaike Wassenaar.

The morning of our arrival into Qingdao was cold, very cold, and I awoke after a mother watch to hear Eric liaising to transfer fuel so that we had enough to get us there. Would we even make it that day? I had finally gotten a turn at good mother, so technically was not due on watch till midday. However we had just changed the watch system so I was on watch at 8am, the same as if I’d had a bad mother.

We did arrive, after our rendezvous with Old Pulteney, some sailing, some motoring, some playing with huge power vessels in the fog, and then some hanging about in the bay till it was our turn to go in. As we entered the harbour, I was surprised by a loud bang off our starboard side. They had set off multi-coloured fireworks to mark our arrival.

As we docked, Peter was waiting for me on the end of the pontoon. There was beer passed on board and Chinese immigration officials too. Finally we were told to take off our lifejackets only, leave our beer (mine had already been drunk) and come ashore. We stepped off the pontoon onto a red carpet and walked past lots of drummers to a podium where we were greeted and each given a cuddly wooden horse to mark the Chinese year of the wooden horse that had just started and red woollen scarf, each with the Clipper 13-14 logo sewn on. Eric was given a cape and flagstaff. On him the cape was nearly dragging on the ground!

Next we walked up to the Olympic sailing club. Walking might be a bit of an exaggeration. Still in sailing boots and full foul weather gear, including all the warm layers needed while at sea, I was held up by Peter. I did not even notice until a day later that we had had to cross a road!  At the sailing club they had laid on beer and snacks for us. The snacks were all sweet, even the sandwiches, and very welcome. 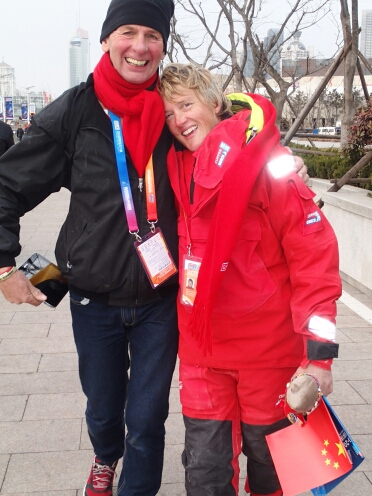