Being woken up is a fact of life when working in a watch system. So no-one minds. It is also the responsibility of the watch on duty to wake all the members of the oncoming watch, their reliefs. The best way is to say their name. If no response, shake their arm or shoulder and tell them that it is time for watch. Make sure you get a response.  Here are a few ways not to do it.

Jacob-style
I did my Level 1 training retake nearly a year ago with a guy on board called Jacob. He used to wear a light-coloured camouflage jacket to keep warm. His method was to shine his white torchlight in my eyes. He said this was to enable the wake-up to be done quietly and avoid waking up crew members who did not need to be woken at that point. It did not work. All I could see when I woke up, was his ghostly face and a military jacket and thought I was about to be interrogated. It was all he could do to stop me from screaming!

The Phantom wake-up call
This has happened to many of us, including me. One night I did not need to be on watch until midnight. I got up, put on my foulie bottoms and asked Sarah whether I needed my jacket also. Looking more confused than I would have expected for someone asked such a simple question, she said that it was not really wet on deck. There was a pause before she added, “You do know it’s only 10 o’clock, don’t you?”

Just wake me up, don’t tell me why
“Hey, Anita, it’s time to wake up.” This does not work.  If I don’t know why I’ve been woken, or that I might actually need to get up as well, I’m just as likely to go straight back to sleep!

I am not in my bunk, don’t bother to look for me
In this hot weather, the coolest part of the boat can be the sail locker, right at the front of the boat. It’s not where we usually sleep because, well, it has sails in it. But it does also have bunks. Sometimes when resting in there I have woken myself by chance, only to have the watch I am relieving get stroppy when I am late. You only have yourselves to blame.

Wake someone else, not me
In this motoring phase, we are only having three people on deck during night watches. This is basically half a watch but complicated by the fact that it excludes those who have been mother the previous day. So last night the off going watch woke up the same people as they had the previous night. When one of them said to go away, he had been mother, they didn’t think to find out who they should have woken – me!

I am on drugs, keep at it
The anti-seasickness patches I was prescribed and took at the start of the Race from Brisbane sounded good in principle but had absolutely no effect. I was still laid low for a few days and felt totally dreadful. So when we left Singapore I tried taking Stugeron by putting it under my tongue to let it dissolve straight in to my bloodstream rather than going into my stomach where it could be thrown up at will. This was effective but boy does it make you drowsy. I would be woken up for watch and go straight back to sleep and consequently have to be woken up again after the watch had started. So keep at it guys, for the first few days at sea, you either have to keep me awake so I am functioning but drowsy, or cope with giving me a bucket and sending me to bed. 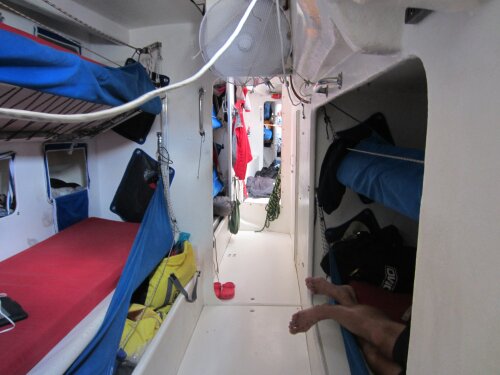 One of the wake-up locations