Race 1 was due to be a short race from London to Brest, but time and bad weather caused the race to be stopped prematurely, making the race even shorter and giving a disappointing result for Henri Lloyd.
The boats needed time in Brest for some continued fitting before braving an ocean crossing. A combination of very bad foggy weather and strong tides meant that sailing was not safe and that engines needed to be used. Engines are NOT allowed during a sailing race!

The finish line for Race 1 was therefore moved. Henri Lloyd had been leading the race for the most part and had taken tactical decisions based on the race finishing where it was supposed to. They were given two hours notice of the change in the finish point, but this meant they weren’t in a good position. So Henri Lloyd finished eighth with five points. 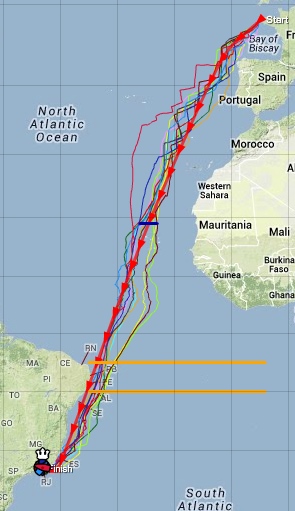 Race 2 took several days longer than anticipated. The doldrums, an area renowned for its high pressure and resultant light winds near the equator, caused many problems and affected some boats far more than others. There were equipment failures – the major one being the fresh water makers. This affected three boats including Henri Lloyd. Normally redress doesn’t apply to boats affected by equipment problems but in this case it did. It did because the failures were due to a manufacturer defect and therefore outside the control of the skippers and crew. Henri Lloyd had to suspend racing, motor back in to the doldrums to collect fresh water and then motor back to the same position to resume racing.

It meant that six boats in total had varying amounts of redress applied once they arrived in Rio.

Before getting to the doldrums, Henri Lloyd was second through the scoring gate so claiming two extra points.

After they had escaped the doldrums and the problems with the water maker came the ocean sprint. They won this, giving them another two extra points.

After the redress had been applied to all the boats, Henri Lloyd came into Rio de Janeiro in third place with 10 points.

So Race 2 gave them 14 points and their overall total rose to 19 points.