My Level 1 training took place over the first week of September 2012 in the Clipper Vessel “Welcome to Yorkshire“, pictured at the 11-12 Race Finish.

I joined really early on the Friday and was given jobs to do. I had to use a hot knife to make short lengths of rope that we could use for knotting practice. After the course started, introductions were made, we had a safety brief and meal cooked by the mate and then we decamped to the local pub for the evening.

On the Saturday we had light winds and it was sunny. We had a day sailing in the Solent and dinner in port. As part of going to sea for the first time, I put on my deck shoes instead of the Vibram soled sandals I had arrived in. So holding the stern line ready to depart I slipped over. First kit note – the soles of the deck shoes have degraded. At the first opportunity I went below and changed back into my sandals.

Later, when helping to move a sail round the deck so that we could stow it, my feet were covered by the sail. Second note – non-slip footwear does not help when you cannot see where you are putting your feet. I tried to put my foot in thin air – and promptly fell flat on my back into the snake pit, a square area by the mast about 1m lower than the rest of the deck. When asked if I was ok, I was laughing – so I guess I must have been! 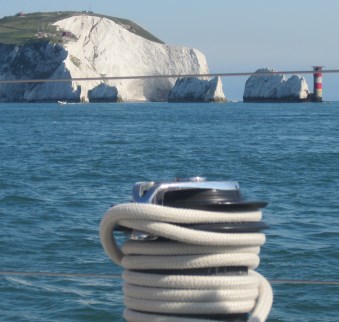 Sailing near the Needles

Sunday was spent day sailing in the afternoon and early evening. Out by the Needles, the tide and wind conditions were right for us to sail round the south side of the Isle of Wight. Having cooked and eaten dinner while sailing we reached port at 2245 then put the boat and ourselves to bed.

On Monday we had an earlier start to our sailing, going past Bournemouth and out into the English Channel. Before we left port however, each of us had to climb to the top of the mast. The longer passage meant that we could be introduced to a watch system, so the crew was divided into two. The first watch was from 1800 and I went on watch 2200 – 0200.

We crossed the Channel during the night. On watch, I did some helming and helped others to helm, not very far. We lowered the sails in preparation to anchor in Alderney. The anchoring was timed to coincide with the watch change. After some sleep, I was up at 0600 for watch.

The porridge for breakfast on Wednesday was welcomed then we left Alderney, taking the entire day to get to Cherbourg! Again on this day we had light winds, which gave opportunity for further training:

On arrival I had volunteered to be “mother” with Richard and we cooked bangers and mash with gravy before being given shore leave in Cherbourg. Leaving at 0730 tomorrow.

I injured my leg while re-boarding the boat. I didn’t know what had happened, only that I heard a click in my right calf muscle followed by agony, I could hardly put any weight on it and how I got down below and into my bunk I don’t know.

Thursday – the first day of real wind and I could hardly move. The only thing I could do to help the team was helm as this did not involve walking. In three breaths, I went from feeling fine to actually being seasick all over the stern of the boat. I still had the wheel in my hands. After that I was properly seasick and ended up being put to bed.

While I was in a bunk we crossed the Channel and ended the course in Gosport. There followed a deep-clean of the vessel, each of us had to row the dinghy a short way, shower and an end of course meal at Hardy’s.

Unfortunately for me this trip ended in heartbreak.