The last day of the race dawned. The fleet weighed anchor to begin their parade of sail up the Thames, due to arrive at St Katharine Docks around lunchtime. We had a boat of our own to catch. One of the spectator boats that would go down the Thames to meet the fleet on their way up. Mum and Dad and I met up with other Henri Lloyd crew members before boarding, so that we could all get on the same boat. Ignoring the entreaties of a poor Clipper member of staff desperately trying to fill the last few places on the first boat, we boarded and went straight to the upper deck of the second.

On that day I had divided loyalties. A Henri Lloyd crew member for sure, I was also looking forward to my reunion with Peter, on Invest Africa. As the fleet was coming up the Thames in reverse order in the race standings, I was able to see, wave to and speak with him before going on to meet Henri Lloyd.

After waving at Henri Lloyd and a short cruise with the fleet we left them so that we could be disembarked ready to watch them coming into St Katharine Docks. Having bought some bottles of bubbly at Peter’s request, I was just in time to see them coming through.

Those who had sailed in were not allowed off the boats but crew members in team t-shirts could go down the pontoons and join them. The problem? I had my Henri Lloyd t-shirt on and they weren’t in yet. I wanted to go see Peter on Invest Africa. The solution? He gave me his and I pulled it on over the top. He’d found a spare by the time I had battled through the crowds and convinced security on the pontoon that this time I really was a member of Invest Africa. My new t-shirt didn’t convince their skipper Rich but he stopped short of telling me to get off. 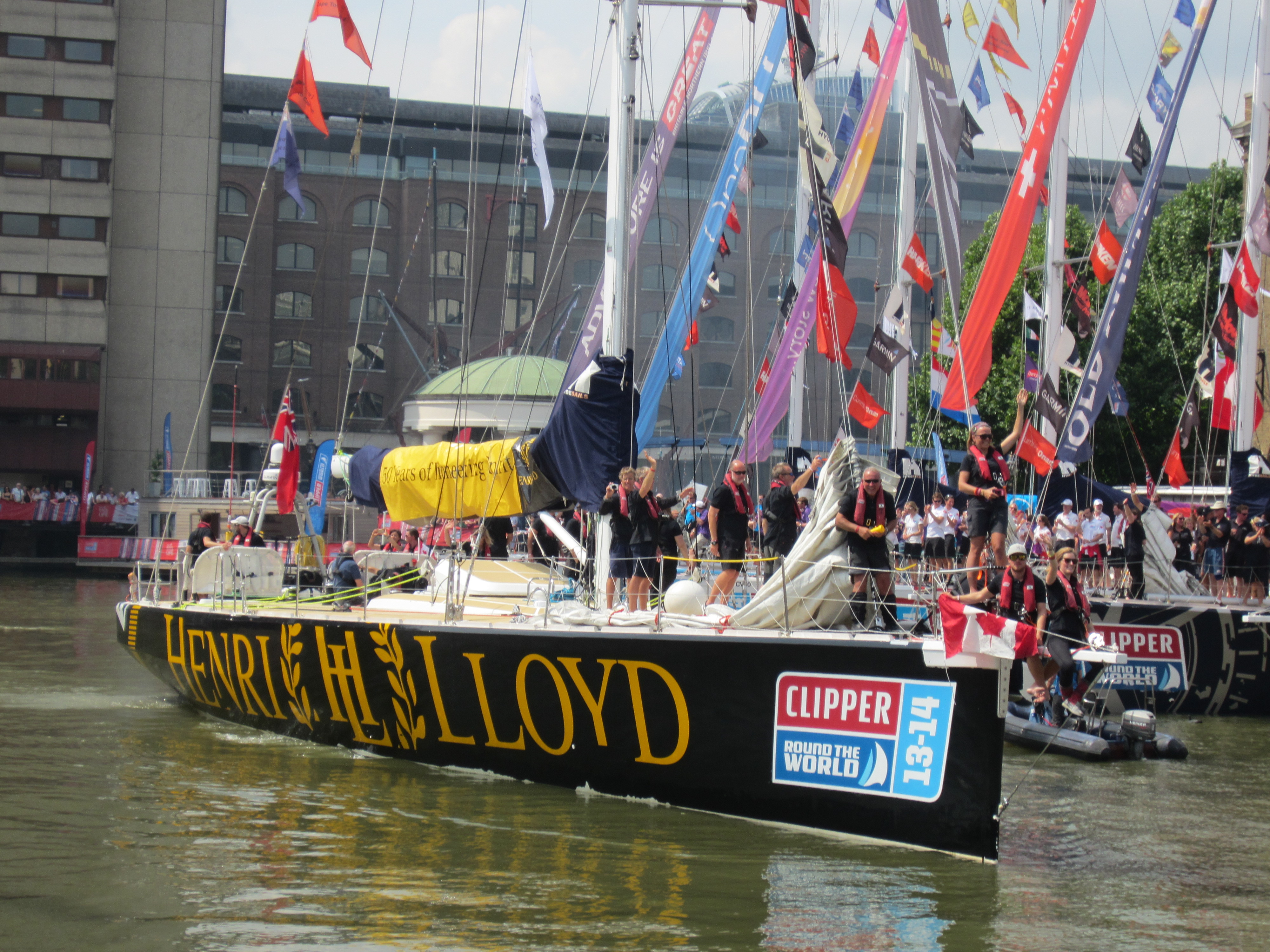 Triumphant return to St Katharine Docks, from the deck of Invest Africa

That’s how I came to be sitting on the deck of Invest Africa to watch Henri Lloyd’s triumphant arrival.

Then I said a temporary farewell to Peter and joined the rest of my shore crew to go and welcome Henri Lloyd back home.

Several of the girls had painted alternate nails black and gold, or were wearing black and gold make-up. Tasha was wearing the gold pants that had seen an earlier outing at a Rocky Horror fancy dress party in South Africa.

After several excited reunions we took our place on the podium. We had plans to douse Eric in champagne. The corks loosened, the presentations were going on and on, then much too early one of the corks decided it was time to come out of the bottle. I was on the podium, but in most of the photos you can’t see me as I was bent over trying to help persuade this cork that it wasn’t time yet for its moment of glory!

I also couldn’t see what was going on. Eric was presented with the trophy, and a model of Henri Lloyd. At some point Eric was showered with the champagne (revenge for the times he had sprayed it over us?), and we were all showered with some – red, white and blue – confetti that seemed oddly ill-at-ease with our boat colours or even the Canadian flag! Were they expecting a different winner?

As I was on the podium, the photos below were taken by my parents, Ray and Lynne Davies. 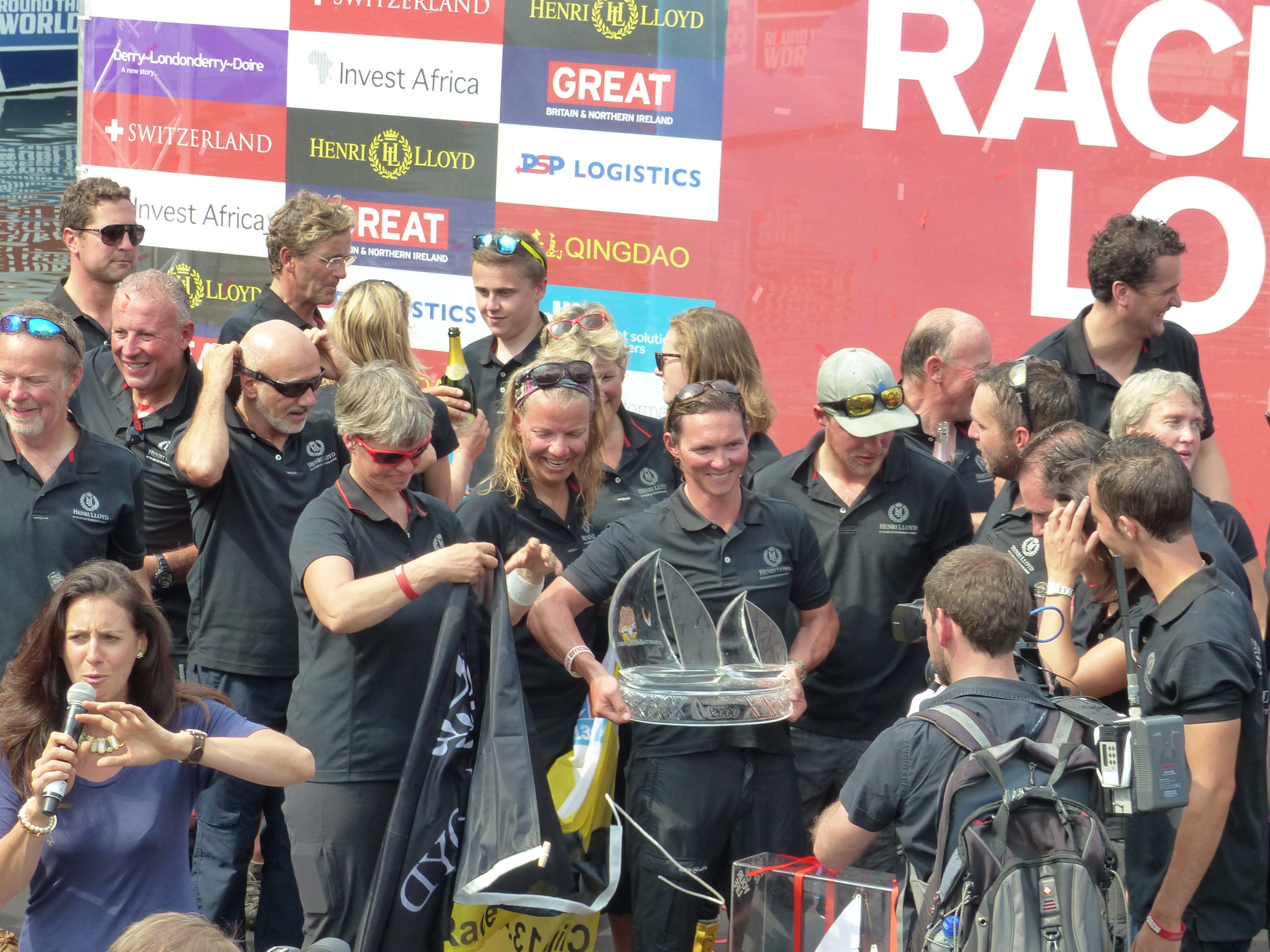 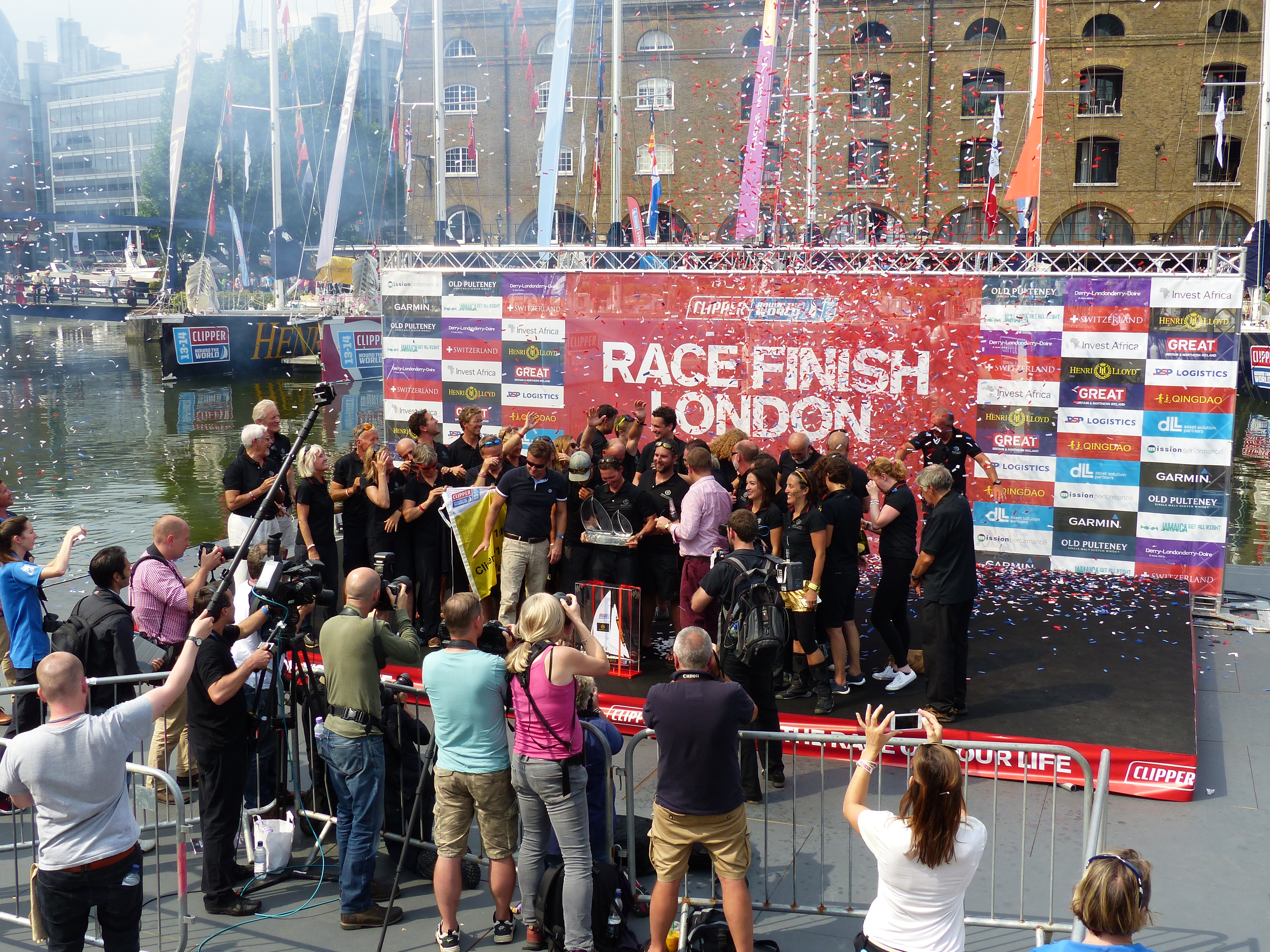 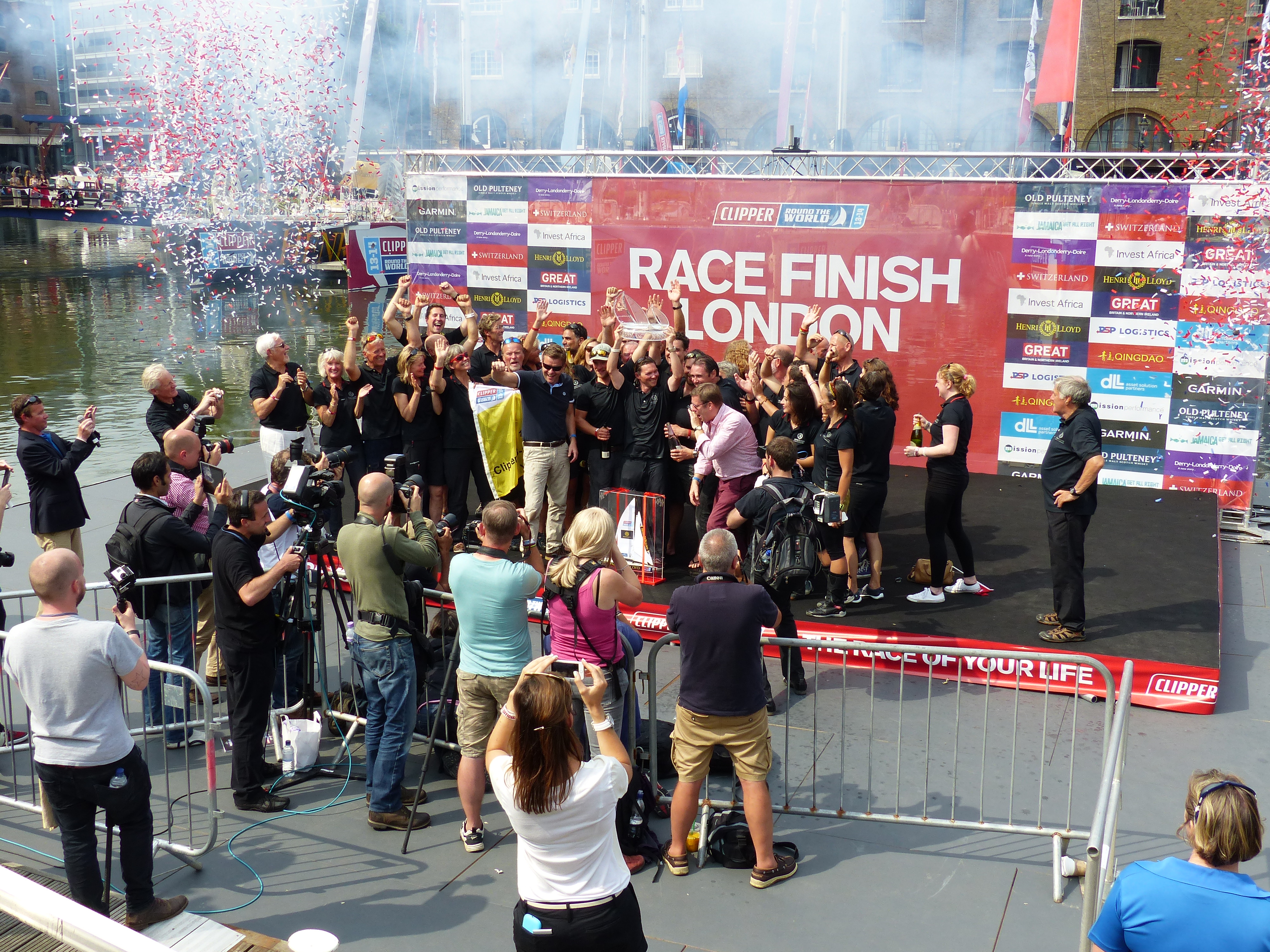 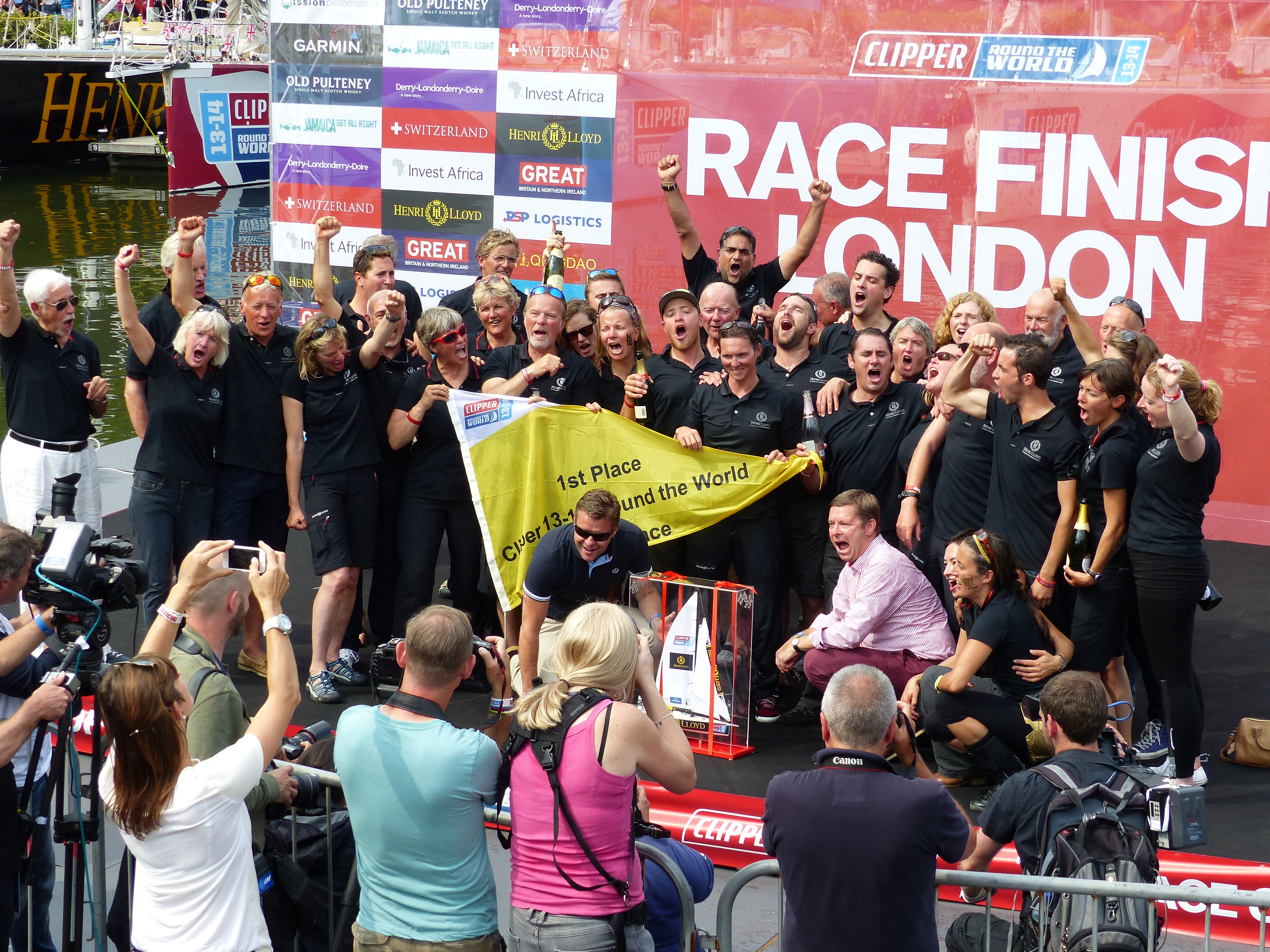 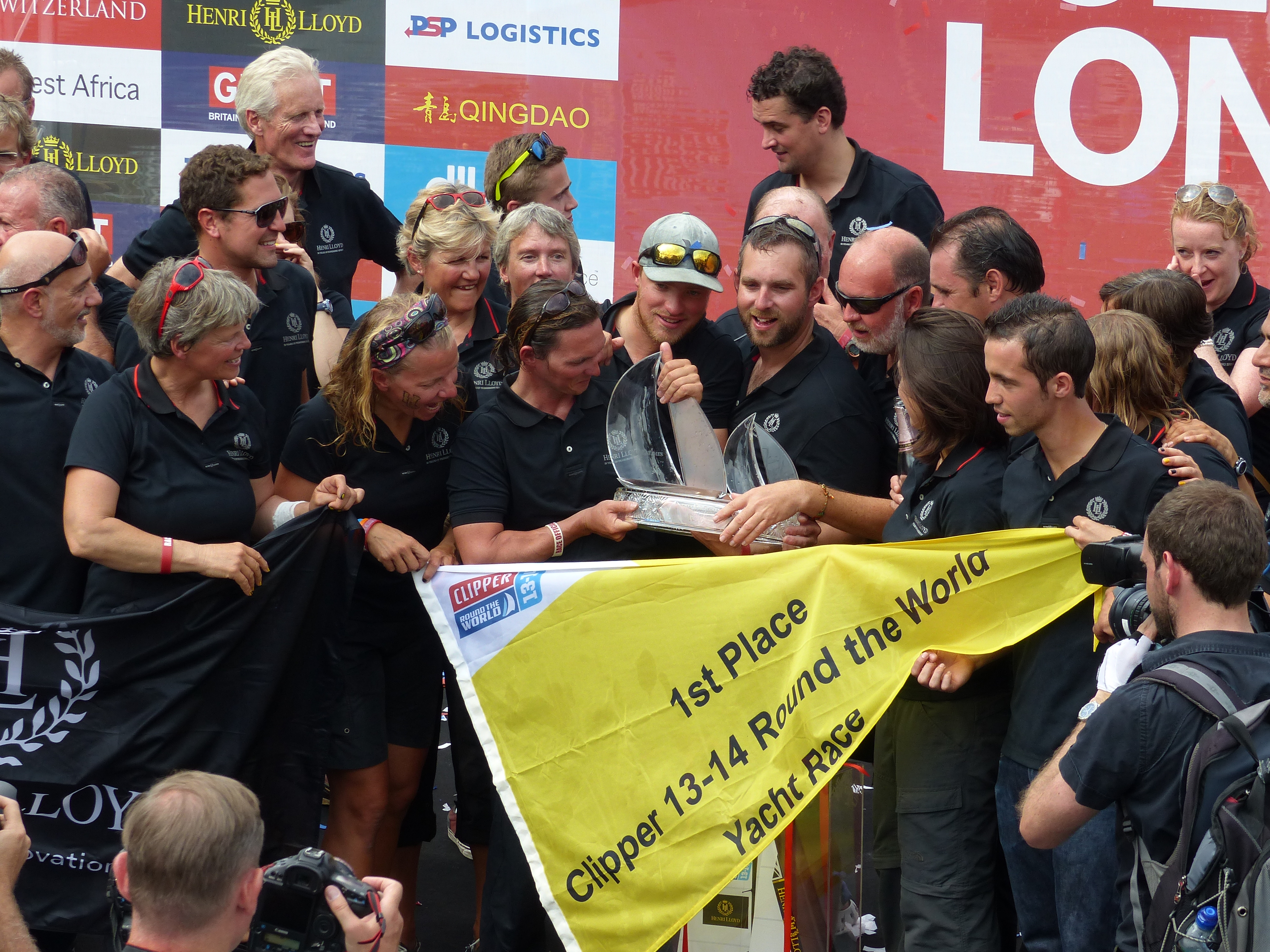 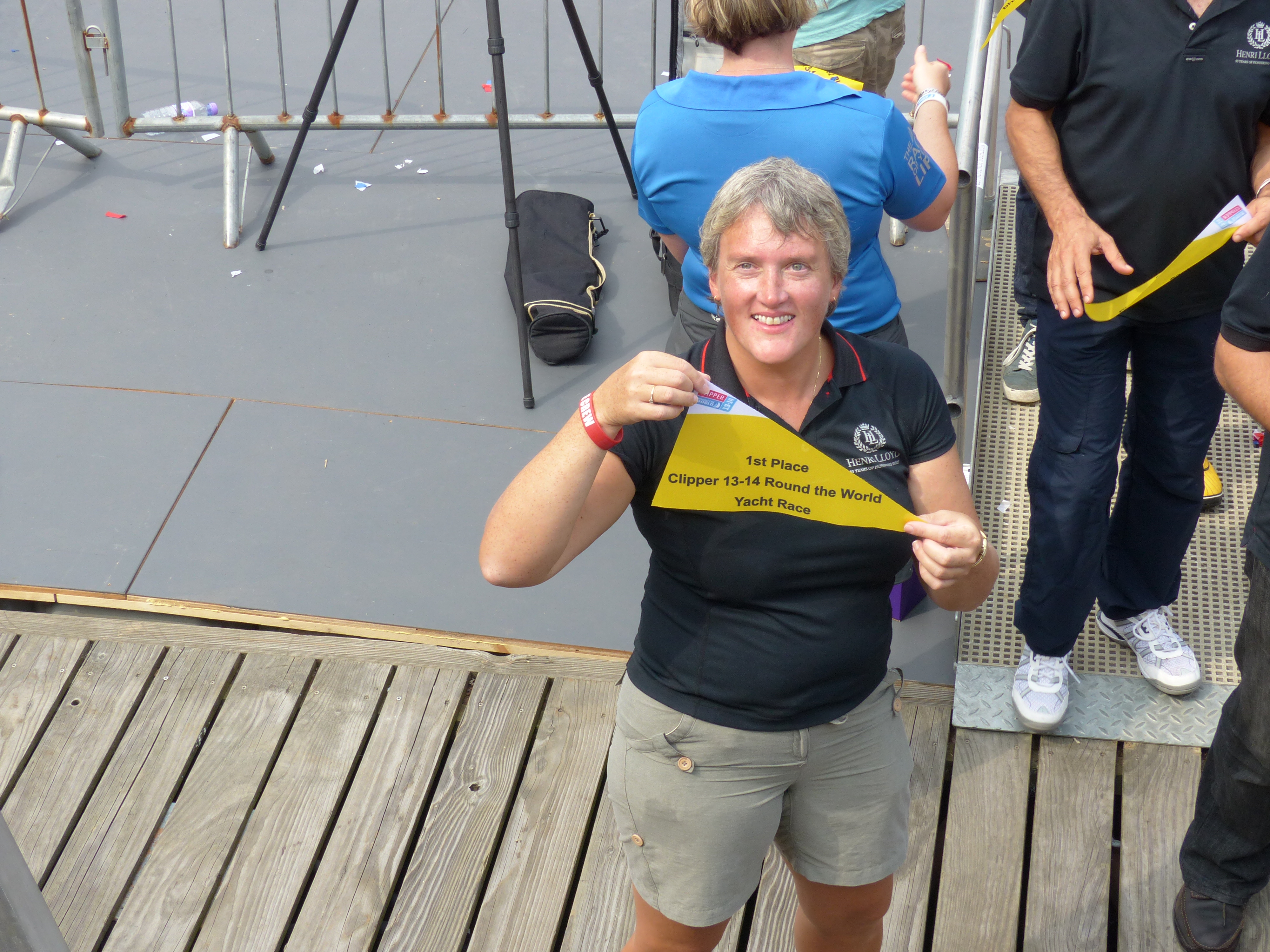 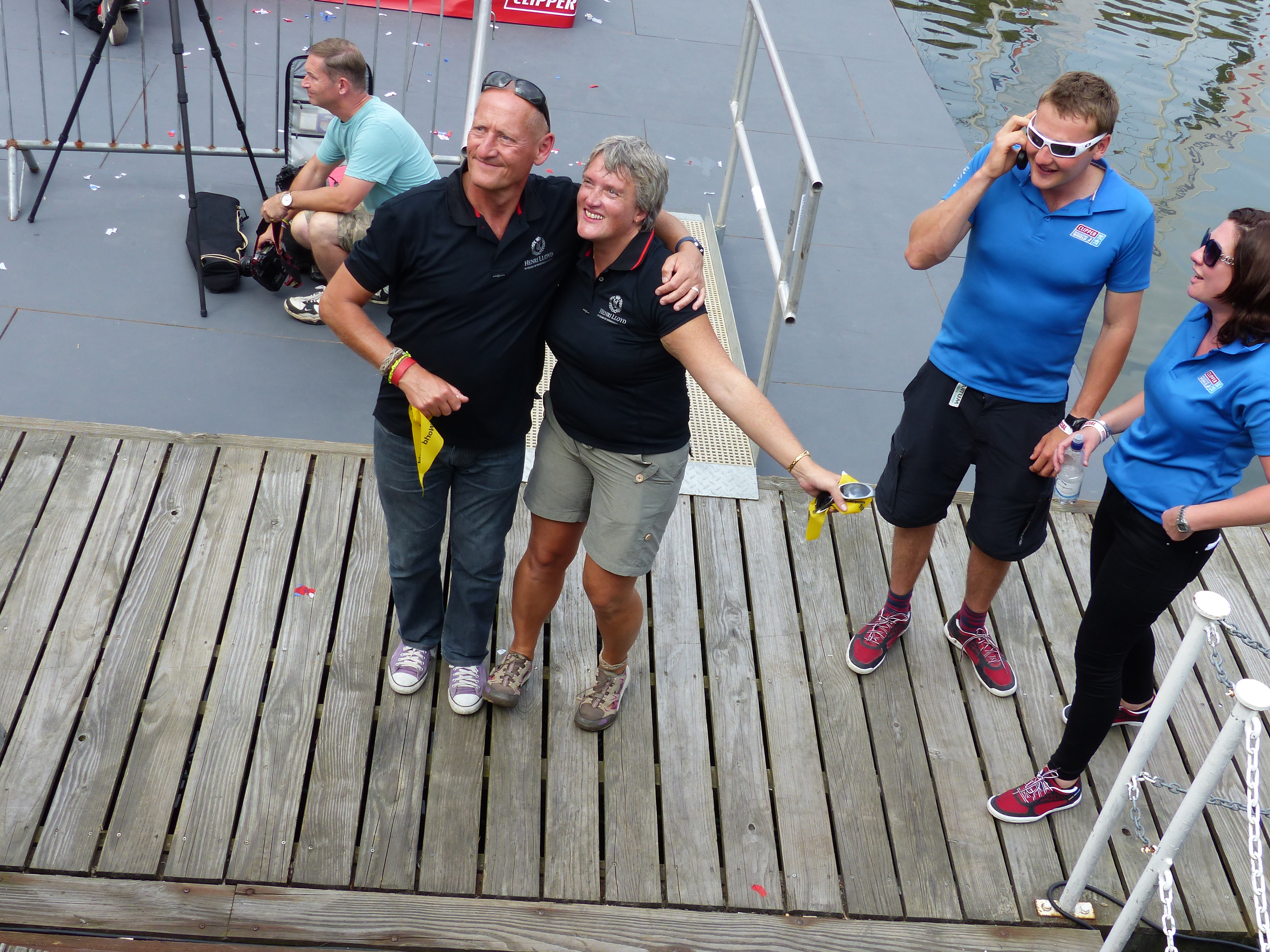 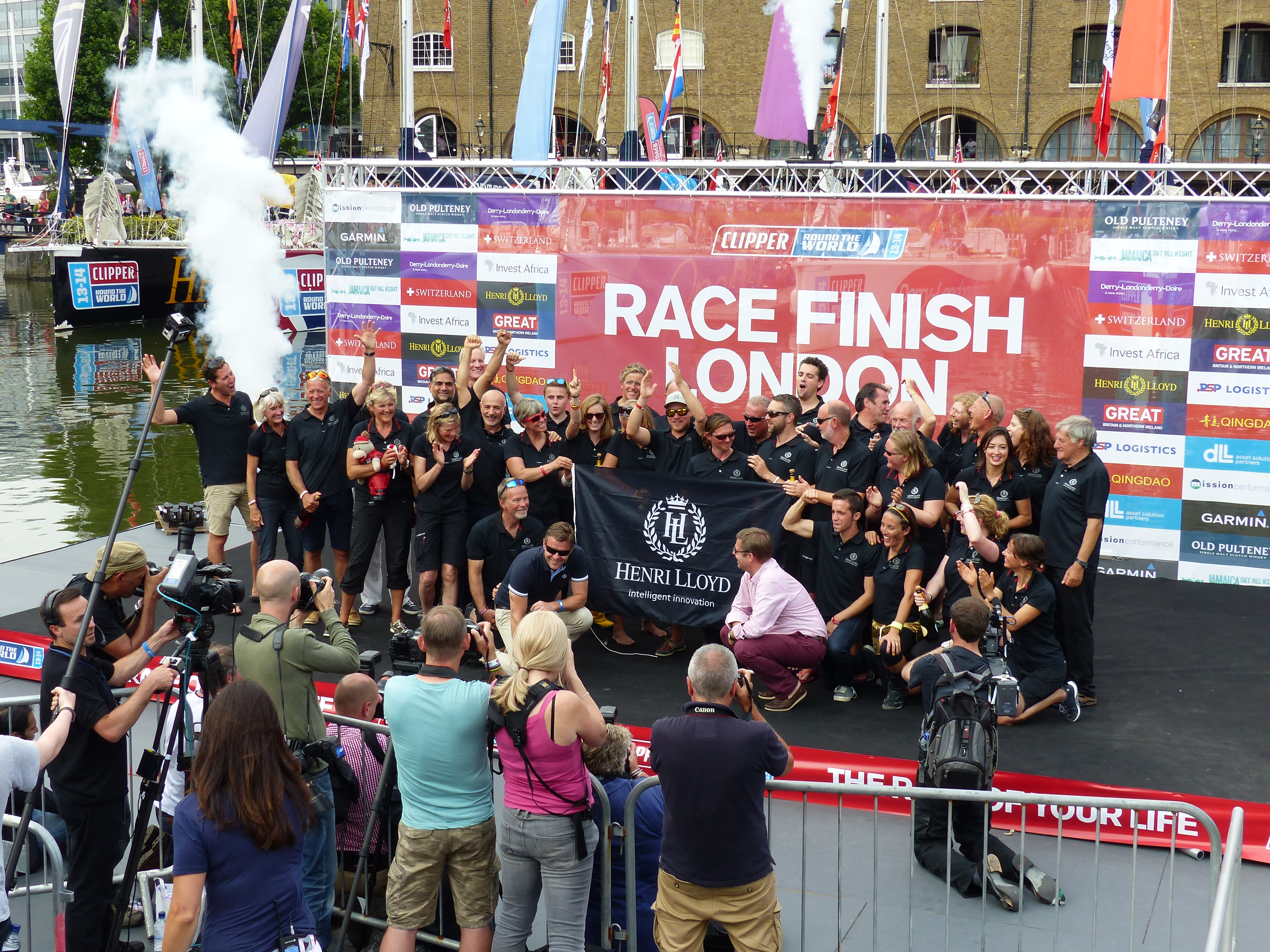 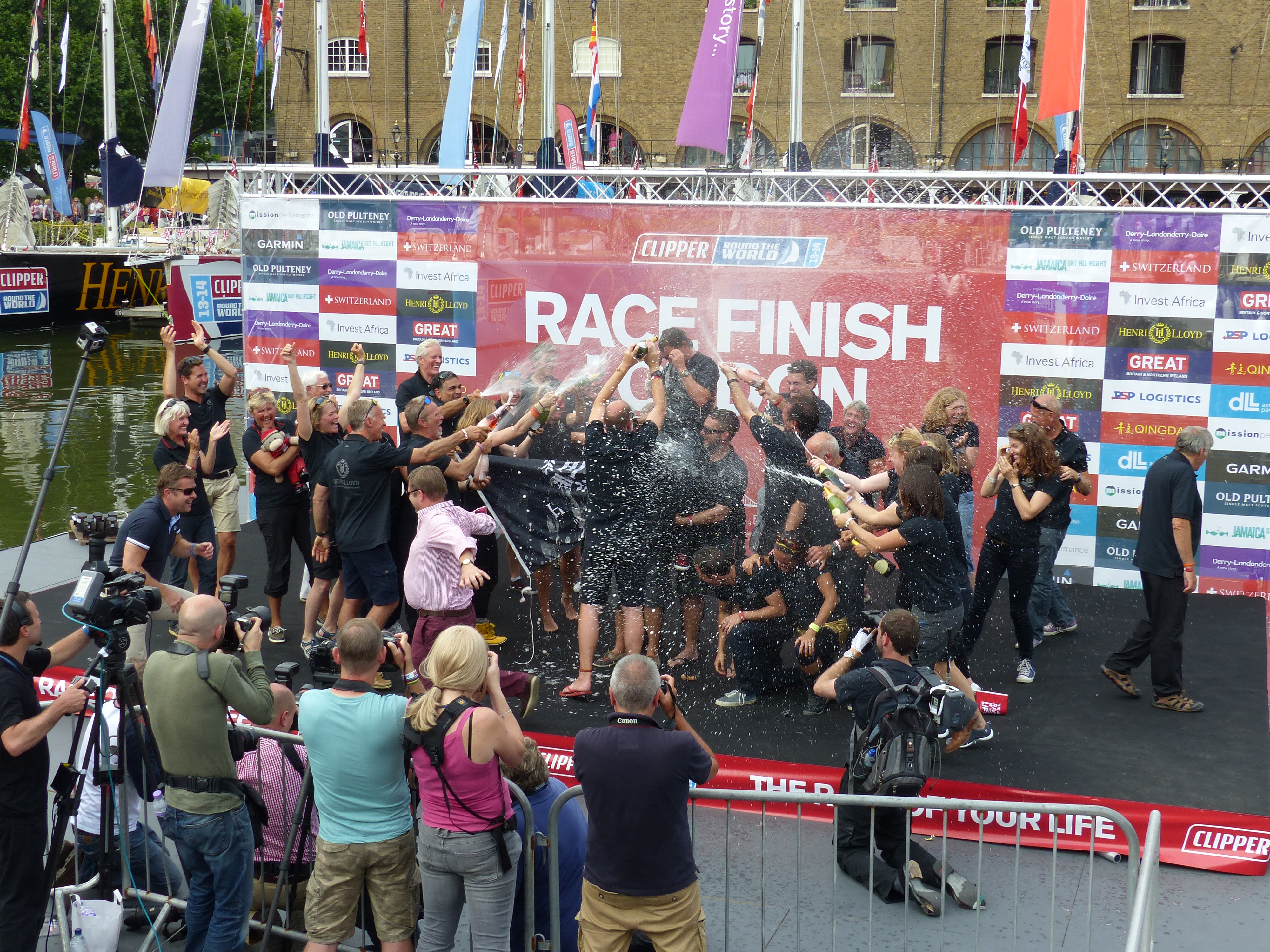 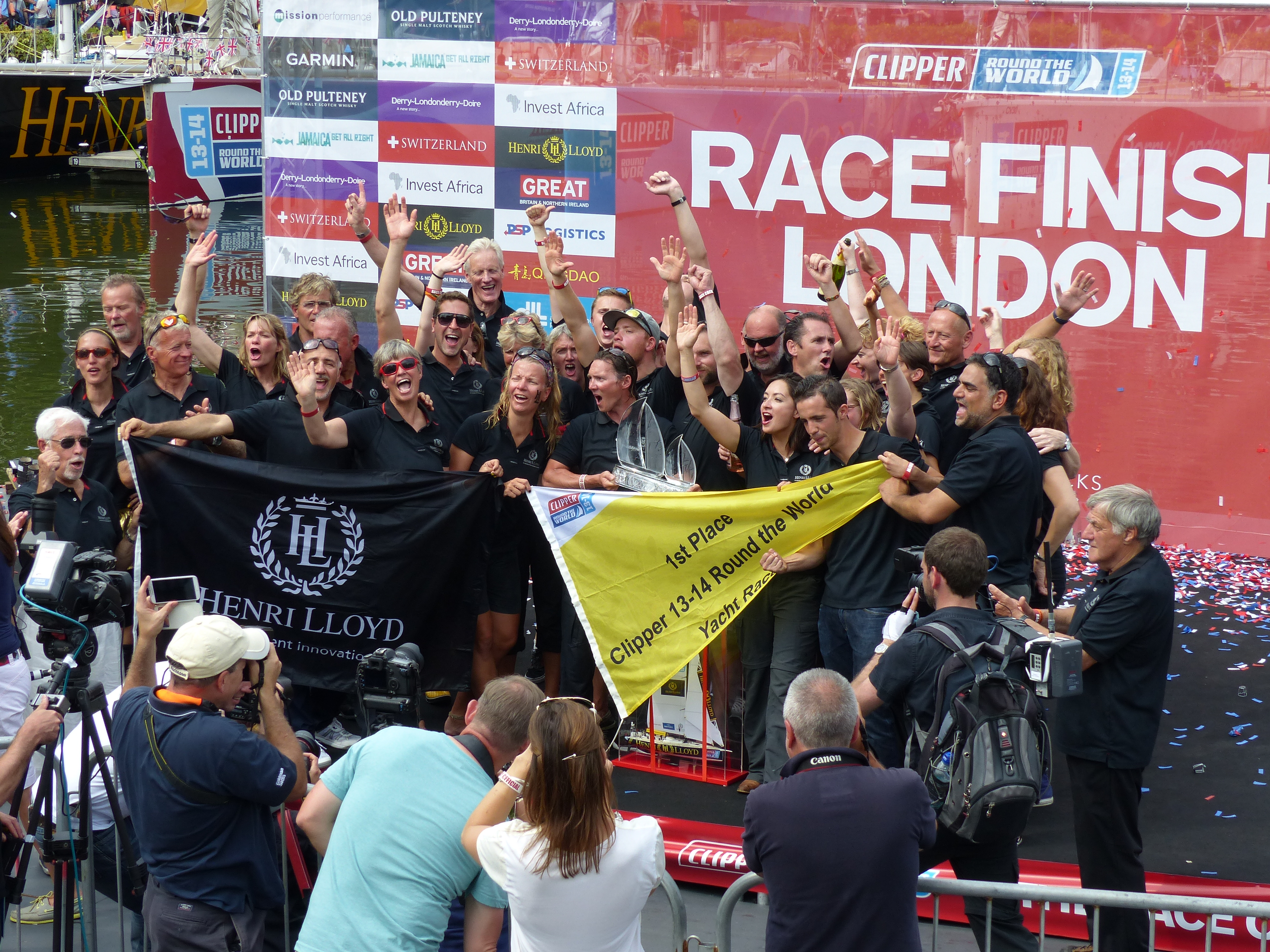 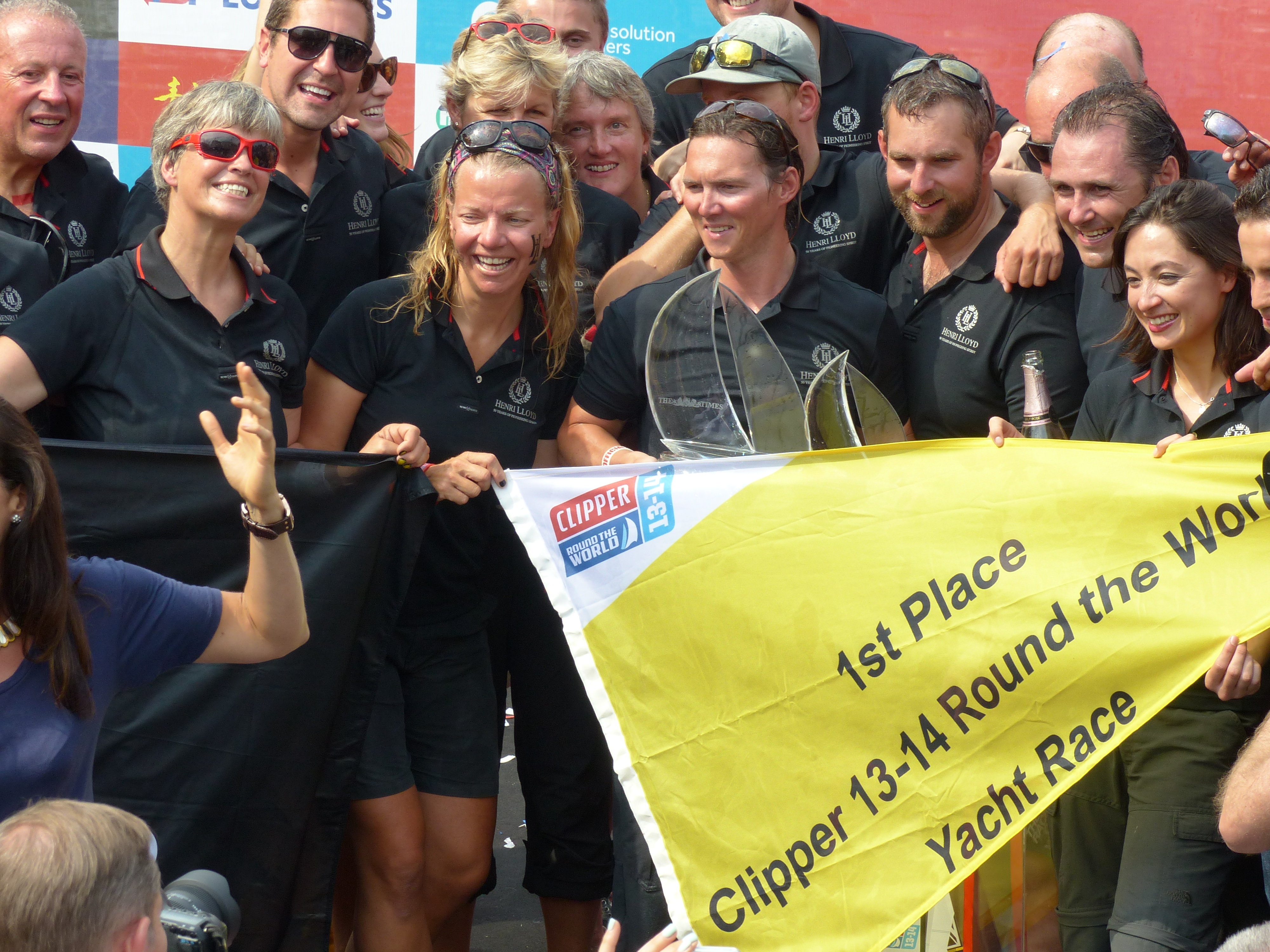 AnitaSailsAgain by Anita Davies is licensed under a Creative Commons Attribution-NonCommercial-NoDerivs 3.0 Unported License.
Based on a work at https://anitasailsagain.com.
Posted in Clipper 13-14 Race
ANITA SAILS AGAIN