Shopping
Singaporeans like shopping and eating. That’s what Paulina told me as she walked me to Orchard station to meet Peter at Clarke Quay station after the first night at her and David’s house. They’d provided a lovely meal of steak, salad, potatoes for James, and vegetables. Then a comfortable bed for the night. And a huge breakfast.  I’d arranged to meet Peter at ‘the exit’ of a station that turned out to have about eight exits. After about half an hour of trying to find each other, we met, and in true Singaporean style, had some lunch and went shopping. Lunch was in a hawker’s bazaar in a shopping centre. One of those whose opening is an unassuming smoked glass pair of doors, but inside you quickly realise goes down five floors and up several. Depends which part of town you are in but some of these shops can be extremely expensive. For our shopping we headed to Chinatown and were gradually transformed as the afternoon wore on. The only non-sailing clothes I had were winter weight, definitely not suitable for the sweltering heat of Singapore. Peter had met me in sailing clothes that he hadn’t had chance to wash properly yet. By the end of the afternoon we were both clad in new, clean t-shirts and shorts and I had bought a dress for later. There was a haircut and SIM cards were purchased along the way too.

Singapore Slings at Raffles
The time came in the early evening to meet other members of the Henri Lloyd crew at Raffles Hotel. After a brief false start with the station – City Hall is the one you want, not Raffles Place – we arrived and I changed in to my dress. Ten people and a bill of $540 later, we could all say that we had sampled a Singapore Sling, a gin-based cocktail invented at the Raffles Hotel in colonial times. However at about £14 each, one was enough and we left to find some free beer.

Breakfasts
I think the kind of food served for breakfast depended which area of Singapore you happened to be in.

Where we were staying was a very Muslim area and at breakfast-time one morning we had a selection of curried eggs, mutton, well Peter did and pratas – I can’t describe these but it tasted good. This was accompanied by a black coffee and a tea. The coffee was at least recognisable as such, which is more than can be said for the tea. It was syrupy and bright orange. It was very well stewed and I think made with condensed milk. They looked very surprised when we declined sugar.

On another occasion just down the road from there we had more traditional Singaporean fare. Not knowing what we were doing we filled a bowl with several ingredients – from hard boiled eggs to raw pak choi to broccoli to prawn toast – and handed it to the proprietor. She asked something and Peter said yes. She asked if we wanted noodles with it, we said yes. Then her colleague prepared the raw ingredients, put a broth over it and gave us back two bowls, one with rice noodles and broth, the other with our ingredients and broth. They’d made a delicious noodle soup then gave us, the only two Westerners in sight, chopsticks and a Chinese spoon to eat it with. 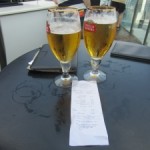 On two out of the five mornings in Singapore, we had beer for breakfast. The first time was as mentioned in Arrival into Singapore and was provided by Clipper. The second time was after we had tried to visit the Gardens by the Bay before one of our Clipper commitments. When we realised that this needed more time than we had available, we visited the Sky Bar in the Marina Bay Sands hotel nearby and had a beer each. The cost of the beer was the same as the admittance fee to the viewing area a floor below.

Seafood
I had ample opportunity in Singapore to sample seafood, particularly shellfish, that I had not tried before.

At the crew dinner at the Shangri-la Hotel, there were cockles, mussels and lobster.

There was also lobster at the Clipper party following the prize-giving ceremony.

One of the local delicacies was chilli crab. This was very spicy and required a bib, plastic gloves and a special tool to prize the crabmeat from the shell.

Prize-giving ceremony and Clipper party
This involved us, as we did win the race to Singapore after all. The evening was sponsored by Old Pulteney. There is a photograph of me somewhere which shows my face after I realised that the trophy from which I have just taken a mouthful was not full of champagne as I expected, but Old Pulteney whisky.

Gardens
We visited the Botanical Gardens before going to the crew dinner. There was even a stop on the metro system named so that you couldn’t get it wrong. It was a huge area you could stroll through with signposts to various areas of interest. On our way to the Gardens that interested us the most there was a concert area and sign saying that there would be a free concert starting at 6pm. At my instigation we sat and listened to the first few numbers before heading on to the the Ginger and Orchid Gardens. To our dismay, and Peter’s especially, the Orchid Garden had closed at 6 pm. So we made do with exploring the Ginger Garden instead.

On our last free afternoon, when we had more than an hour to spare, we visited the Gardens by the Bay. They are massive and access to most of them is free. You pay an admission charge for:

“Trees” at the Gardens by the Bay

Fern from above in the Cloud Forest

AnitaSailsAgain by Anita Davies is licensed under a Creative Commons Attribution-NonCommercial-NoDerivs 3.0 Unported License.
Based on a work at https://anitasailsagain.com.
Posted in Bits in-Between
ANITA SAILS AGAIN