The reality is that in order to rescue someone from the water, you have to be in the water too. They need to be rescued as horizontally as possible, with support under both their shoulders and their knees, so that they don’t later collapse from hydrostatic shock. This is caused by their blood rushing away from the vital organs because of the sudden release of water pressure from their legs. 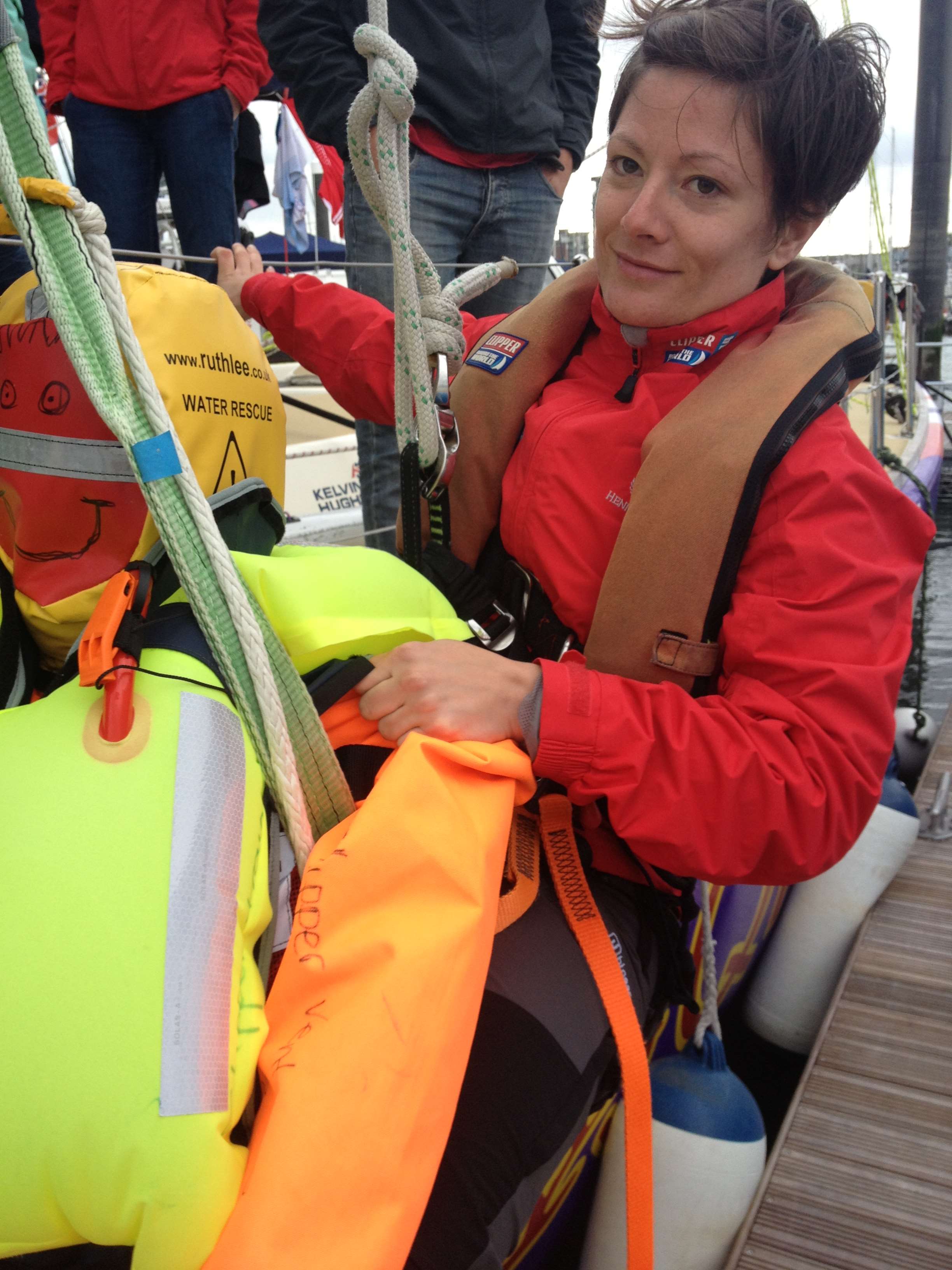 Piers being rescued by Ali, photo by Kong Chian Toh

Hoisting horizontally is achieved by one crew-member – the “swimmer” – wearing a harness, which is unofficially known as the “pants of power” – and being attached to one end of one of the halyards, and another crew-member with the other end of that halyard around a winch. It enables the swimmer to be raised or lowered over the side of the boat.

We had Nico in the harness with Claire on the winch. One moment he was standing on deck, the next all you could see were his feet as he dangled upside down over the side of the boat. He remained upside down all the time he was struggling to get Piers in the right position to be rescued, despite exhortations to the contrary. Apparently he couldn’t hear. Maybe we should have tried Italian! Most of us were mortified, though no-one more than Claire. “Omg I’ve killed Nico” she said she had thought. You really can’t see what is going on, so communication is key. The only person who seemed unfazed by it all was Nico, oh and Piers, but nothing seemed to bother him!

Keep your pants on

In the pants of power, a different course

Finishing making breakfast one morning and wearing the pants of power I heard someone say, “Keep your pants on”. Out of context but it reminded me that I was wearing the harness and looking forward to swapping it to the other watch at 8am.

Before I got the chance however, Piers went for another swim. A moment’s panic. Man overboard. And I’m in the galley. At least I’m not in the head. What do I do? Then clarity. You’re wearing the harness. You’re going over the side. Go and get yourself attached.

It’s not as bad as I had feared. It’s a bit like abseiling; at least the first bit is. You have to trust that the halyard is going to hold you then lean back and walk your feet down the side of the boat. That’s where the analogy ends. I’ve never abseiled over the sea, into pitching waves. While abseiling I’ve never had to grab, attach and manipulate something while suspended in mid-air. On the other end, Claire was measured and controlled, and didn’t dunk me.

On the other end 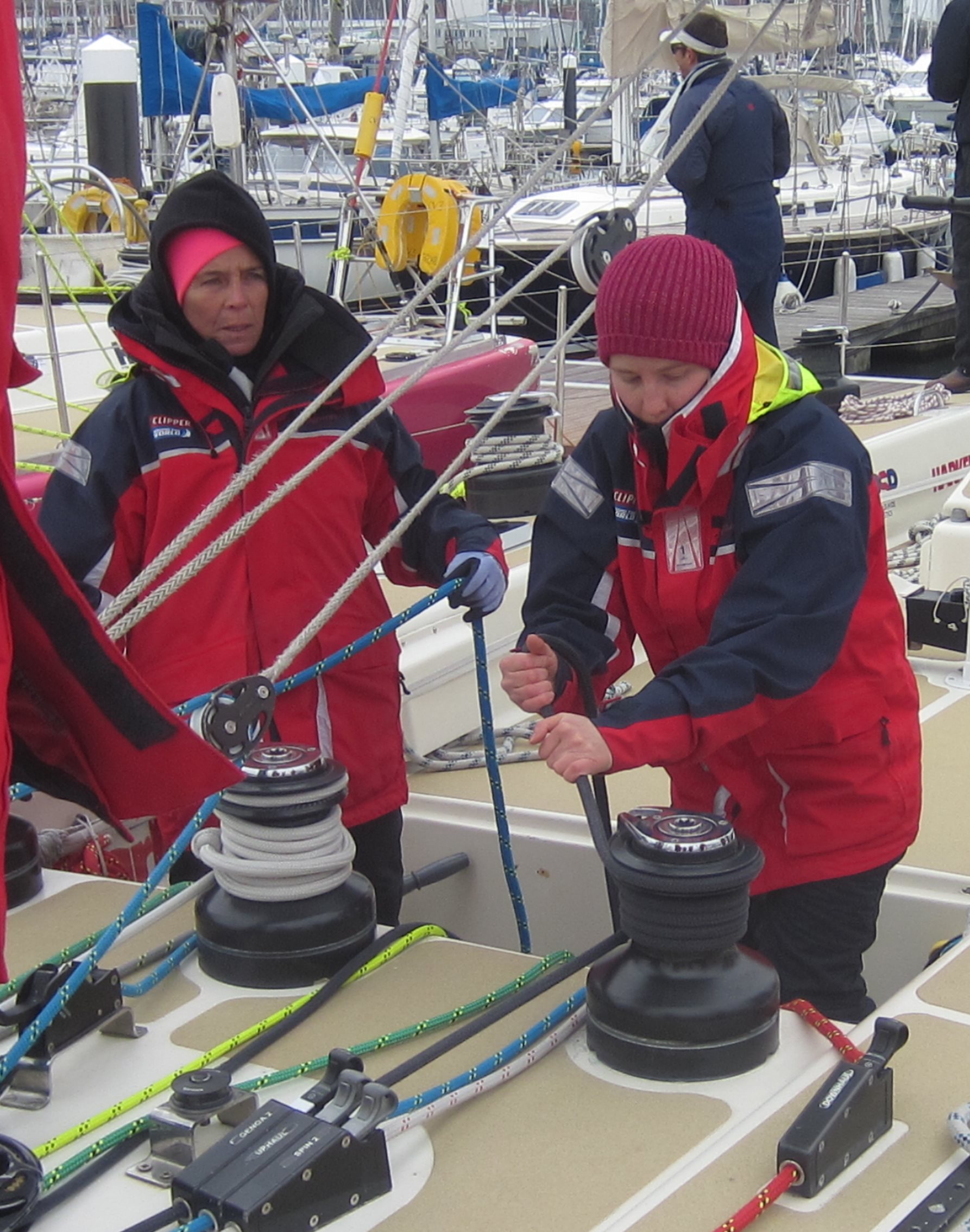 Winches, with a person on the other end

On the last day we had the spinnaker up and Piers went for yet another swim. After helping to get the spinnaker down, I was in the right place to be on the halyard – the one with the swimmer on the end. Andrew was the swimmer. I promised not to dunk him. No sooner had we started the rescue than the wind got up and started whipping the sea surface into a frenzy. Poor Andrew got totally soaked, but luckily not due to me!
Posted in Level 2
ANITA SAILS AGAIN