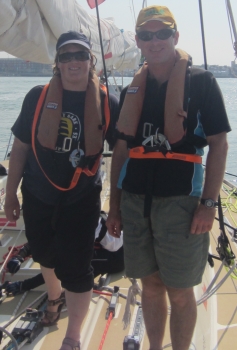 The aim of the nutrition plans I have been given is to lose body fat while building and then maintaining lean muscle mass. The specifics were worked out for me using my current (at the time) weight and body fat percentage.

I followed the first one for six to eight weeks, except over Christmas and New Year. There are limits. 😉

It was aimed at reducing body fat while building muscle. While this was going on I was doing resistance training about 3 times per week and swimming twice.

The aim of the second was to continue reducing body fat and maintain the muscle mass. The fitness regime was similar but the resistance training was more metabolic. I think Darrell said that means I was doing a lower proportion of cardio in a gym session, but using the weights to get the same effect.

In the first plan, the only carbs I had except the fruit and veggies was a chopped banana and oats after a workout. I had a glass of warm water with lemon at breakfast time, when I remembered. I was encouraged to eat raw vegetables or salad with each meal; except breakfast! Didn’t stop lettuce getting into my morning smoothie sometimes though.

In the second plan I was allowed to add 100g cooked quinoa to my lunch meal; I could also have some sweet potato after a workout. Almonds were more prevalent too. Counting out five almonds became a regular task.

It also recommended getting some of the protein intake from shakes, but I did not get on with these. Unable to eat soya, the only protein shakes I found that do not contain it were made from hemp seeds. I lasted a week trying different combinations before I could stand the adverse effects on my digestive system no longer. Anyone who wants two nearly full tubs, one plain and one raspberry flavour, is welcome to them! Not selling it well? It’s a good job I don’t work in sales!

At no point during any of this was I excessively hungry. If I felt a bit hungry, it was generally time to eat one of my many meals! In fact at times I had to reduce the amount of food intake; there was no point feeling bloated, even if it was just on salad leaves and radish!

From when I started at the beginning of December, to when I finished following the second plan so strictly in mid-April, I had lost over 15kg and 13% body fat.
Posted in Fitness & Balance
ANITA SAILS AGAIN