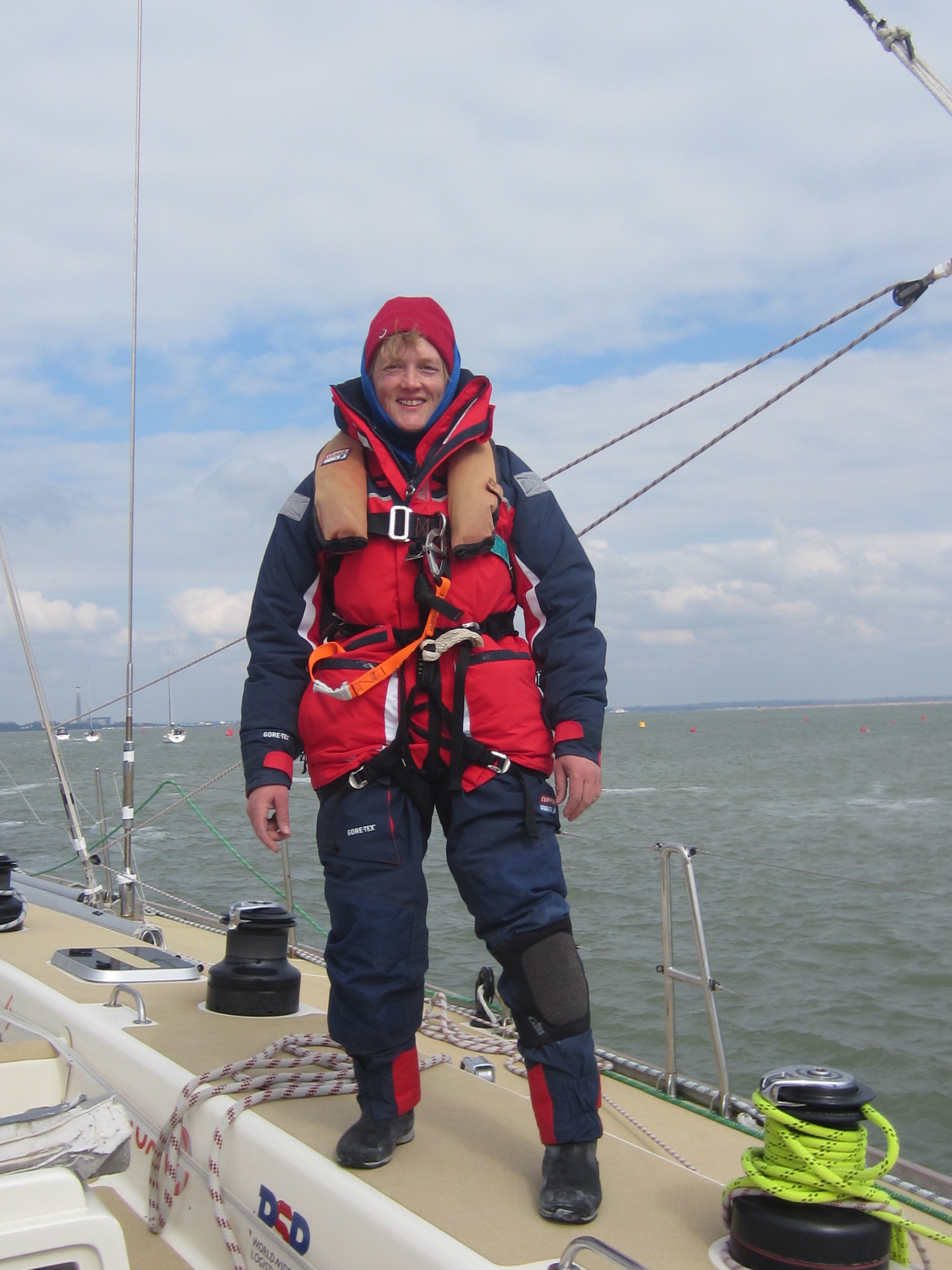 Me on Level 2 Training, complete with harness and leg padding

My Level 2 course, or as it turned out, my first Level 2 course, took place at the end of March. I was hoping it would be a little warmer than the Level 1 course at the end of February. It wasn’t. There was one day when I could shed a light layer, but otherwise I was wearing the same amount of clothes as then. By this time I had a windproof hat too, which was great.

The first day was spent day sailing, and we were basically recapping what we had done on Level 1. For some this was several months rather than three weeks previously. So was the third day.

Oh the second day? That was when we did our RYA Sea Survival course – in a swimming pool. Big lesson, if at all possible stay with your boat, but I am glad that if I do ever have to do it for real, that won’t be the first time.

The course coincided with another course which had a crewmate from my Level 0 course back in September. Although we only caught up over a drink it was really good to see him. He had also been on a fitness regime and looked great. I don’t remember what boat he was on – de Lage Landen? – but I was on Geraldton, skippered by Juan who had been the skipper during the 11-12 race.

After that the course ramped up a bit to cover the syllabus for Level 2.

We managed to clock up 360 miles just sailing from Gosport-Solent-Portland-Cowes-Gosport. A lot of time was spent in the Solent. I had never been to Portland by sea. The last time I had sailed in the area it was a Royal Naval base, since closed and then redeveloped for the Olympics last year. 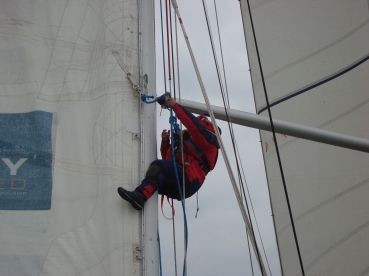 Up the Mast at Sea, taken by Maaike Wassenaar

I plucked up courage to wear the harness and possibly be lowered over the side when we did a man overboard drill. But that was the day we did the drill under sail, so the fender and mooring line were what went overboard. However I was the only person to be sent up the mast at sea.

My seasickness was much better managed. Basically I took drugs until I knew it was safe to stop. For me this was sailing in a Force 7. This happened to be the last day of sailing as well. Usually I do get ill in a Force 6 or above. All that happened this day was that I felt rather rough – could not go below to help get lunch, but was feeling better enough to eat part of it and I did go down to clear up the galley after lunch. I stayed below a bit too long and the seasickness tablets wore off so I felt bad again. Somehow during a tack I got myself on a position which needed a lot of concentration – releasing the lee yankee sheet – and I shouldn’t have done.

I still managed to fall over, luckily into the cockpit. Bruised my bottom on the anklebreaker, so called because the most likely injury they cause is to the ankles, and winded myself on the traveller. Juan said it was because I had not been walking like a monkey.

So, still things to learn, some related to my balance, others not (I need to shout more!), and Juan felt that I would benefit from retaking the course. He said if I retake the course having memorised all the evolutions we practised, Level 3 training would not be such a jump.

So Level 2 is rebooked for the end of June – and all I have to pay for is my food – and Level 3 for the beginning of August.

Will fewer layers be needed?