Well this time when I went I was so nervous I forgot to get off the tube. I only had to go one stop from Liverpool Street to Bank, but next thing I knew we were leaving Bank, the doors were locked and it was too late. Not a good start. I did relax once I’d crossed London and joined the train to Portsmouth Harbour. 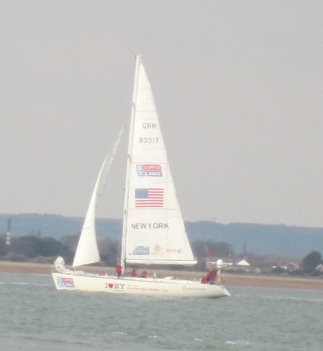 It was much easier to join the boat as the training offices had moved much closer to the Gosport ferry than last year, so less far to lug the bags. I was met at the offices by one of the mates and taken to New York, for the avoidance of doubt, the Clipper vessel called New York, my home for the next week!

The format was pretty similar to that of my Level 0 training course last September. However it was a lot colder. We did not cross the channel. We had three hour watches because it was so cold. Actually on paper we only went Gosport to Cowes and spent 1 night at anchor in Stokes Bay off Gosport. However we covered 280 miles. In fact we spent many of those miles going along the south coast almost as far as Brighton in the east and back to Weymouth in the west.

For some of that journey I was rather seasick. But I was not the only one. Lesson – keep seasickness tablets on person not down below which is the last place you want to go if feeling rough.

The night we spent at anchor, we drew lots to determine which part of the anchor watch we were going to cover. The skipper apologised to the person who drew the watch starting at 5am. That was me – he needn’t have worried because it meant I could watch the sunrise!

During the week I was so busy I forgot to take photographs. Moving round was much easier than it had been previously; I felt a lot more stable, plus being fitter and stronger the physical demands weren’t so far out of my reach.